Orange is a commonly overlooked color in most gardens. Which is quite an unfortunate thing, considering how powerful this color is.

Orange is the quintessential color of sunshine. The color is associated with happiness, enthusiasm, and positive vibes.

And while orange is not the rarest flower color available (that title is held by elusive blue), it’s not the most abundant either. That relative scarcity, coupled with its sheer beauty, makes orange one of the most enchanting colors that can ever bloom in your outdoor garden.

Whether you’re planning to start your own flower garden or already have one, you might want to give some thought to orange-blooming trees. And the good news is, there are plenty of such trees to consider.

This post looks at a few orange-blooming trees and plants to have in your outdoor garden. 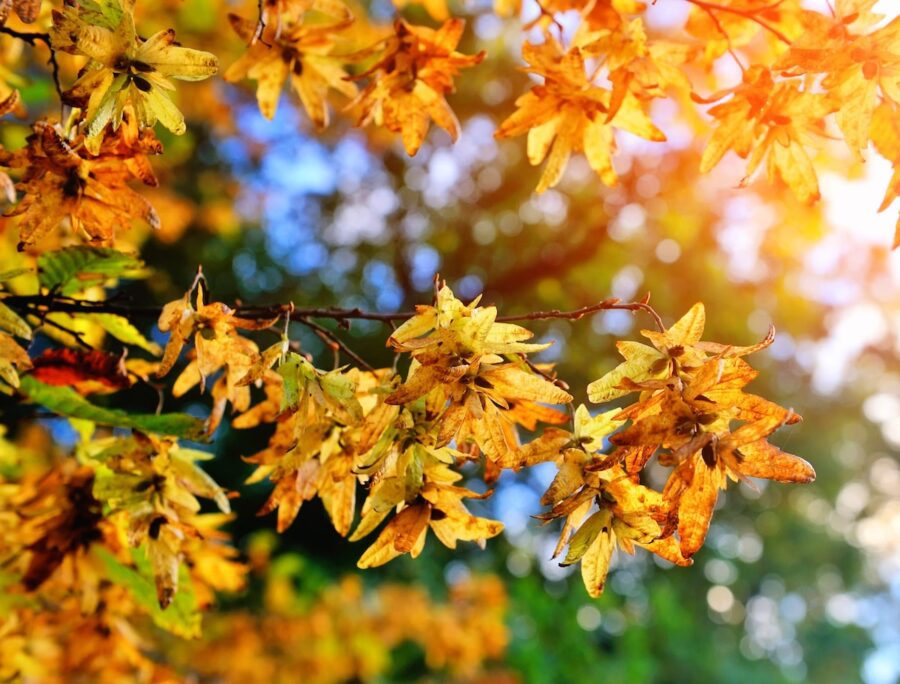 American hornbeam grows indigenously in many places around the United States. The tree grows in a pyramidal shape and can tower to a modest height of 30 feet.

American hornbeam is noted for its inconspicuous orange flowers. The flowers form in small, long clusters which hang from the ends of its branches.

Red silk cotton trees are originally from Northern Australia. However, they’re now native to much of the United States and various regions worldwide.

The tree produces tall, spiny, and oddly rough trunks. It’s also distinguished by its open canopies, lobed leaves, and orange blossoms that appear in large clusters hanging at the ends of the branches.

Related:  How to Transplant Plants – A Detailed Guide to Get it Right

Elder tree is a small flowering tree that can reach a height of 25 feet. The tree is highly famous for its compact stature.

However, the true beauty of the elder tree manifests when the tree comes to bloom. It produces trumpet-shaped orange flowers which hang in clusters. 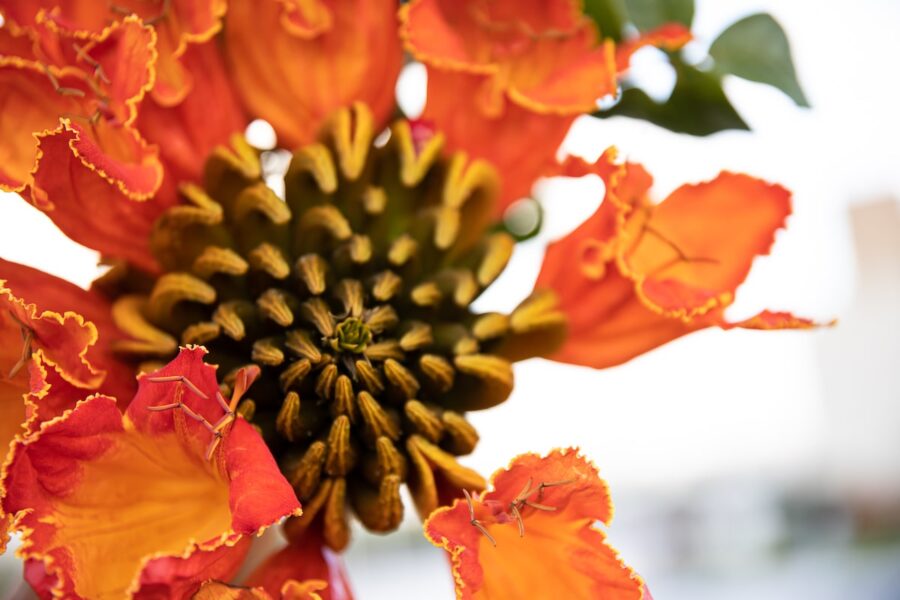 True to its name, the African tulip tree is native to Africa. The tree is more widespread in Northern Africa as well as the equatorial African regions, where it’s generally grown as a specimen plant.

This majestic tree can grow to 80 feet tall and have a crown as wide as 40 feet. It produces softball-sized, orange flowers.

Another interesting fact about the African tulip tree is that its branches become hollow as the tree ages. Therefore, climbing an aging African tulip isn’t recommended.

Dark green, large oblate leaves are the geigertree’s defining feature. The tree is also known for its orange and frilly flowers, which appear on branch tips.

Geigertree can grow to 25 feet. It’s also one of the most resilient orange-blooming trees on this list, able to withstand extreme weather elements like drought and flooding.

If you’re searching for an orange-blooming tree that can also serve as a perfect shade tree, you might want to look in the direction of royal poinciana. The tree grows to about 50 feet tall, with a crown measuring up to 60 feet wide.

Royal poinciana produces reddish-orange blossoms which are spread throughout its canopy. The tree is also incredibly drought-tolerant and pest-resistant, as well as highly adaptable to most soil types. 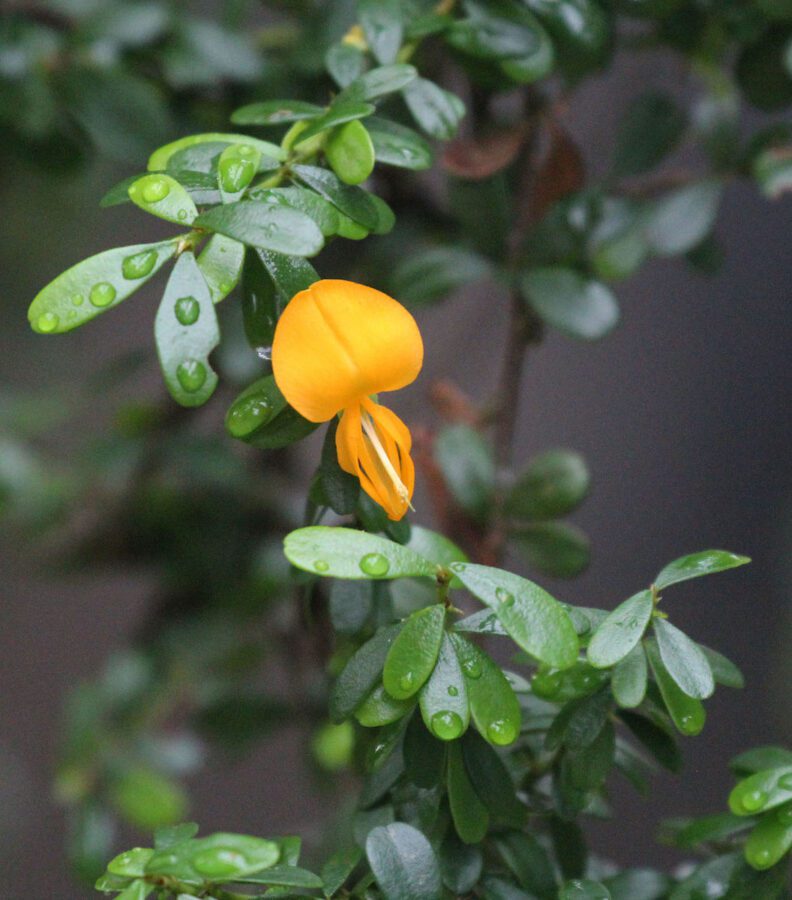 Jamaican rain trees are originally from the West Indies. These trees are noted for their relatively large oval-shaped leaves, which can reach 3 inches in length.

When Jamaican rain trees are in full bloom, their crowns turn into a spectacle of pea-flower blossoms. The flowers hang in clusters and feature a range of colors, from creamy orange to yellow-orange.

Pomegranate is cultivated primarily for its yummy and nutritious fruit, the pomegranate. However, the tree is also famous for its beautiful, trumpet-shaped orange blossoms.

Pomegranate flowers appear in large clusters that hang at the ends of the tree’s branches. The flowers also feature frilly petals at their base.

Vera wood is an evergreen tree that’s just as charming as its name. The tree can grow up to 40 feet tall and produce equally massive crowns.

Besides the sheer beauty of its modest size, Vera wood also stands out for its compound leaves. Each leaf can have as many as 24 leaflets. The tee also produces spectacular yellow-orange blossoms, with each flower having five distinct petals.

The orange champaca tree traces its origin in India and Indonesia. However, the tree is now fairly distributed the world over, perhaps due to its beautiful creamy-orange blossoms.

Blossoms of the orange champaca tree appear with long petals that produce an irresistible aroma.

11. Flame of the Forest (Butea frondosa) 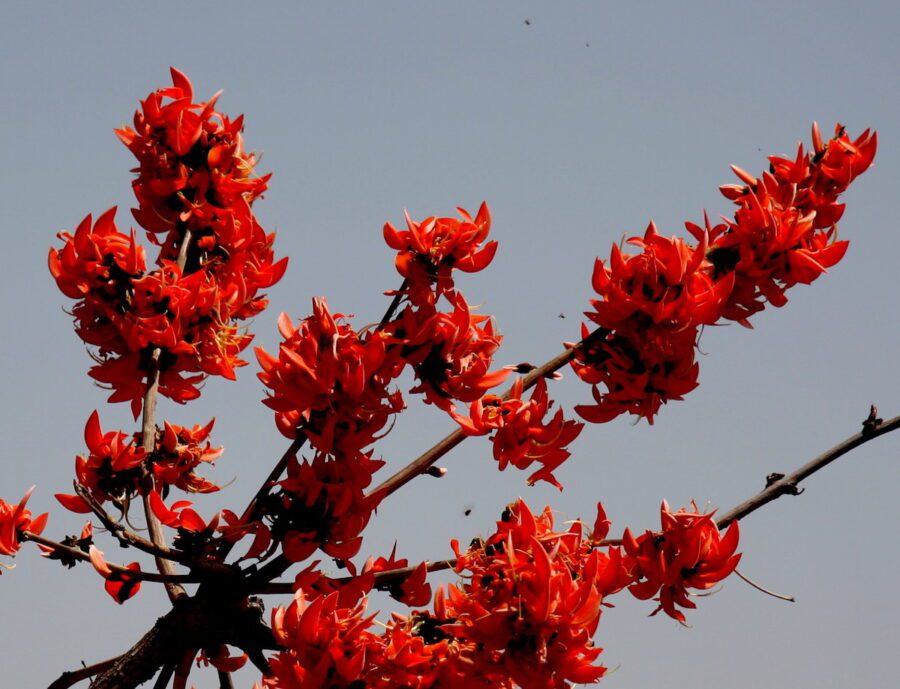 Flame of the Forest is another top orange-blooming tree to consider having in your home garden. The tree produces flowers that resemble a massive pea blossom.

Besides its colorful flowers, the trunk of the Flame of the Forest twists as the tree ages, adding to its magical beauty.

Scarlet wisteria, also known as rattlebox, is a relatively small, invasive deciduous tree that belongs in the legume family. It grows to eight feet tall and produces alternate compound leaves that measure 5 – 7 inches in length, with each leaf having as many as 16 pairs of elliptical leaflets.

Scarlet wisteria blooms bright orange flowers that are sure to add color to your home ambiance. The tree’s dry pods rattle in the wind, which explains the “rattlebox” moniker.

Related:  How To Grow An Entire Mint Plant From Cuttings

The last orange-blooming tree on this list is probably most noted for its inviting fragrance, which is the main inspiration behind its name.

Fragrance orange tea olive is characterized by its attractive dense foliage. The evergreen tree can achieve a modest height of 25 feet. That majestic beauty transforms into an even bigger spectacle when the tree comes to bloom.

In addition to the above-listed trees, there are hundreds of plants that also produce orange blossoms. 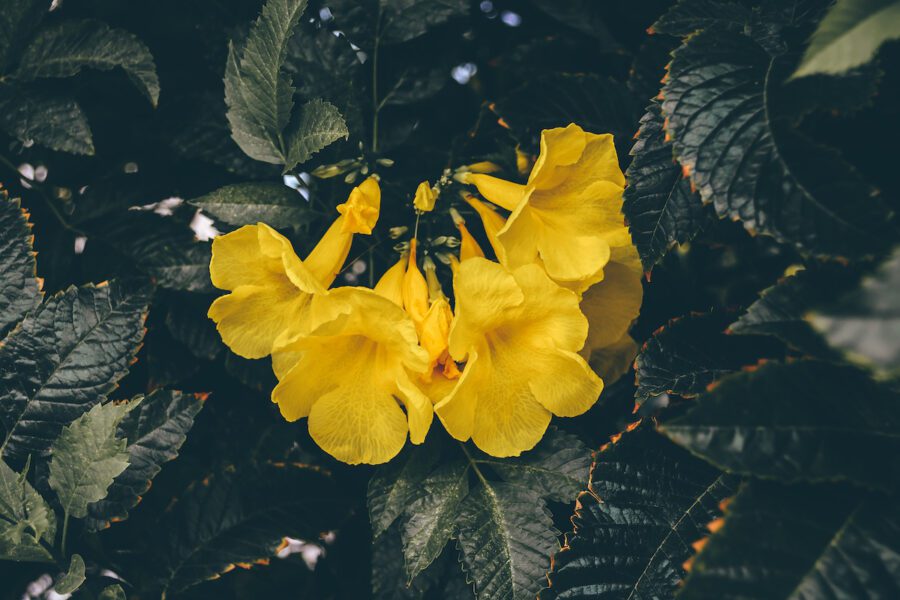 There are plenty of orange-blooming trees and plants to have in your home garden.

Not only can these trees transform your garden into a magical spectacle when they come to bloom. Their orange color may also lift your moods and boost your mental energy.