The cucumber plant, scientifically known as Cucumis sativus, is one of the world’s most widespread vegetable crops. The plant is highly resilient and can thrive under minimal care and maintenance. That explains its fair distribution in different climatic regions around the world. If grown under ideal conditions, cucumber plants will almost always guarantee bumpy harvests.

But like any crop, cucumbers don’t always turn out as expected. Despite your best efforts in implementing the right growing tips, your cucumber plants may still fail.

One of the common frustrations reported by cucumber farmers is the plants growing but failing to turn green. Other times, cucumber plants may start out green but then turn yellow or orange along the way. This is usually a clear indication that something is out of whack. In most cases, it suggests that the plants are either getting too much or too little of what they generally require to flourish.

So, it’s important to move with speed and establish why your cucumber plants are discoloring. That’s the only way you’ll be able to adopt the right solution.

We’ve prepared a comprehensive list of all the possible reasons cucumbers might turn yellow and what you can do to correct the situation.

What Does It Mean If My Cucumbers Are Turning Yellow?

So, whenever your cucumber plants change color from green to yellow, brown, or even black, it’s usually a clear indication of a decline in the concentration of chlorophyll. This phenomenon is known as chlorosis.

Without timely intervention, chlorosis can induce a slow death of your cucumber plants (or any other plant for that matter). Fortunately, there are a number of ways to rectify the situation and save your precious cucumbers.

Also, as you shall find out, chlorosis isn’t the only reason plants may lose their green coloration. That underscores the importance of determining the underlying reason causing the discoloration of your cucumber plants before adopting the right remedial actions.

The following section offers more insights into that.

Related:  How to Grow a Thick Hedge

One likely reason your cucumbers are turning yellow is that you’re growing a yellow variety.

Most cucumber species are dark green. However, yellow and even white-colored varieties exist too. A notable example of yellow cucumbers is the “lemon” cultivar.

Like their dark-green counterparts, yellow cucumber varieties are largely annual plants. The primary difference is that the yellow cultivars produce ball-shaped, bright yellow cucumbers as opposed to the common dark green cucumbers.

It’s recommended to familiarize yourself with the specific cucumber variety you intend to cultivate before purchasing it. You can do that by checking the label of the seeds or seedlings.

If your cucumbers were meant to be yellow, there’s very little you can do to make the plants appear dark-green. In fact, there’s no point worrying about the yellow color. Apart, of course, from the fact that dark-green cucumbers tend to be sweeter and more nutritious than their yellow counterparts.

It’s also natural to notice a couple of yellow cucumbers in a predominantly green cucumber garden. Again, there’s no cause for alarm. This could be an indication that a few yellow seeds or seedlings got mixed up with green cucumbers.

2. A Lack of Pollination 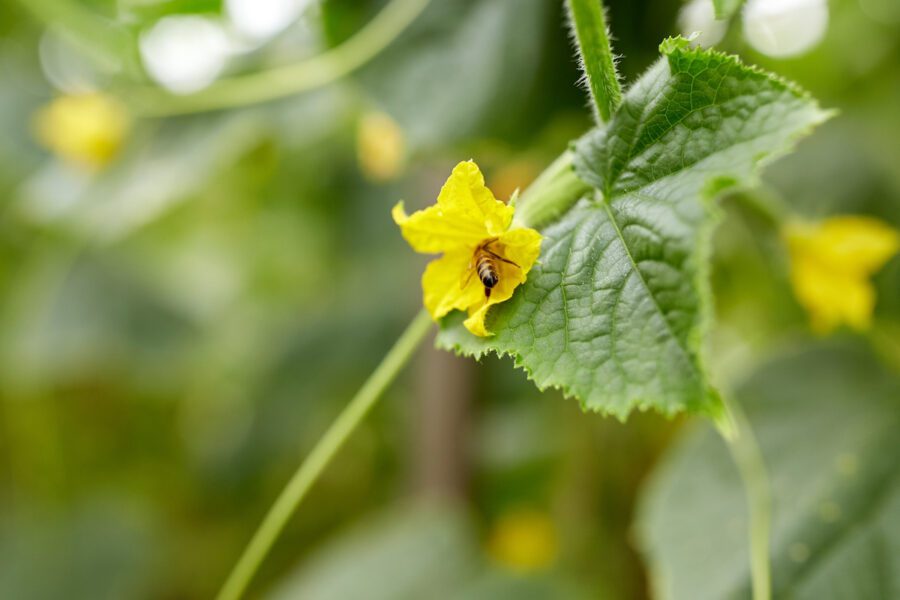 Cucumbers generally form behind female flowers (pistils). If the pistils are not pollinated or if the pollination is poorly executed, then the resultant cucumber fruits will appear yellow and shrivel. These yellow cucumbers may fall off the vine shortly after pollination.

There are several ways to address this problem.

First, ensure that your garden attracts as many natural pollinators as possible. You can do that by planting flowering shrubs, setting up bird feeders, and installing bee boxes.

It’s also recommended to avoid using toxic pesticides and herbicides as these may kill natural pollinators.

Another tip is to remove floating row covers before your cucumber plants reach their flowering stage. This will ease the work of the pollinators.

And if nothing works despite your best efforts, then you may have to do the pollination yourself. You can manually pollinate your cucumber plants by gently stroking inside of the cucumber flowers using a small paintbrush.

Related:  How To Grow Pachysandra or Japanese Spurge as Ground Cover

Improper watering may also cause cucumbers to turn yellow.

Note that cucumber roots are fairly shallow and moisture-craving. However, overwatering the plants can lead to oxygen deprivation in the roots, causing the plants to turn yellow.

Similarly, underwatering your cucumber plants may cause them to wilt.

The conventional wisdom is to water the plants once or twice a week during the dry seasons or as soon as the top-inch soil layer feels dry to the touch. 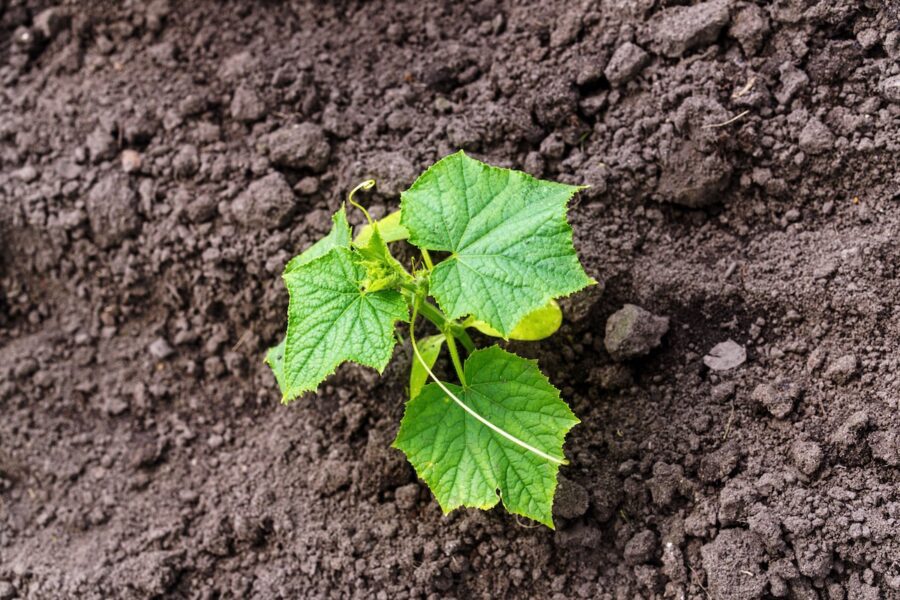 Poorly-drained soils is a common reason cucumbers may turn yellow.

This problem is relatively easy to fix, as all you need to do is loosen the soil by plowing more sand into it.

Another way to fix the problem of poor soil drainage is by growing your cucumber plants in raised garden boxes.

Also, remember to prepare the garden adequately before every planting season. That includes plowing the soil a few times to enhance drainage and aeration.

Cucumbers are renowned bioaccumulators. This implies that they feed heavily on the soil’s nutrients.

You can correct this problem by adding organic, water-soluble nutrients to the soil occasionally. Compost or coffee grounds may also do wonders. 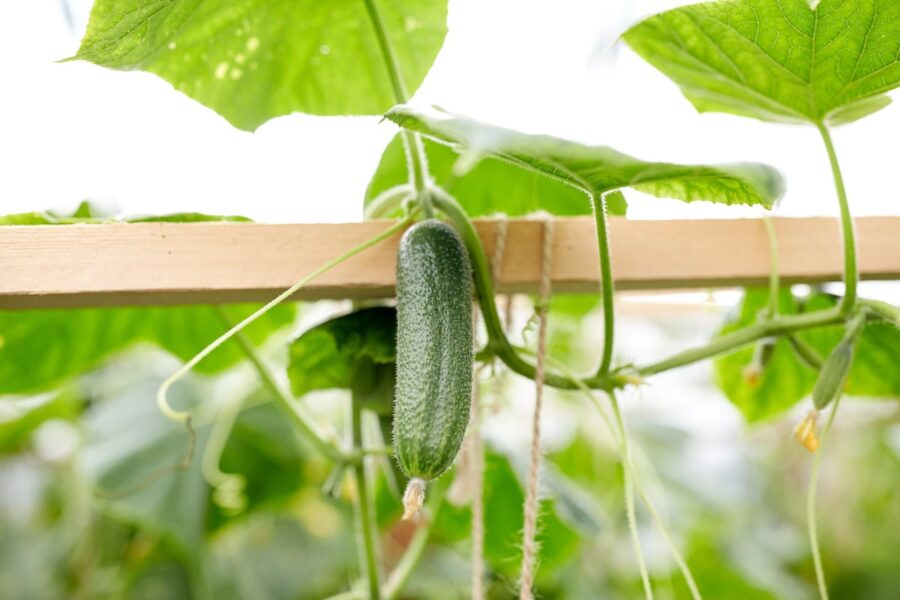 Sunlight deprivation is a leading cause of chlorosis. What makes the situation even worse for cucumbers is that these plants require maximum sunlight to thrive.

The Yellowing and droopiness of cucumber leaves is a clear indication that the plants aren’t receiving adequate sunlight.

The most effective way to rectify this problem is by moving your cucumbers to spots where they can receive up to eight hours of sunshine. You might also consider clearing adjacent bushes and thickets trees.

Garden pests like aphids, whiteflies, spider mites, and potato leafhoppers may cause leaf discoloration in most green plants, including cucumbers. These pests induce discoloration by sucking nutrients out of cucumber leaves and flowers.

You can easily eliminate garden pests using insecticides. However, insist on homemade insecticides or pesticides formulated with organic, biodegradable ingredients.

You might also consider clearing nearby weeds and grasses that could be attracting bugs to your cucumber garden.

Protecting your cucumber plants with floating row covers may help too. Just remember to remove these covers as the plants approach their flowering stage.

Cucumbers, like all plants, are susceptible to a number of diseases. One such disease is the Cucumber Mosaic Virus, an incurable disease caused by an organism that makes cucumber leaves appear yellow. The affected plants will almost always experience stunted growth.

Since the cucumber mosaic virus is incurable, the most effective remedy is to discard any plant showing signs of the disease. Then, monitor the remaining plants carefully.

Also, note that bugs like aphids and cucumber beetles may spread the cucumber mosaic virus. This underscores the importance of having a robust bug control and prevention plan for your cucumber garden.

In addition to the cucumber mosaic virus, bacterial wilt and fungal diseases may also cause your cucumbers to turn yellow.

Cucumbers may also turn yellow if they’re overripe. However, this is usually a problem with the cucumber fruits and not the leaves.

If you leave cucumbers on the vine for too long, they’ll definitely change color from green to yellow. Therefore, be sure to practice timely harvesting.

Most cucumber varieties are normally ready for harvesting between 50 and 60 days after transplanting.

Evidently, there are numerous reasons cucumbers may turn yellow. The discoloration might affect the leaves, the fruits, or both.

Either way, there’s a host of remedies you can apply to make your cucumbers green and healthy again.