What Are Spider Lilies?

Spider lilies are not only popular for their fancy name. These plants are also famous for their colorful blossoms, which make them a welcome addition to any home garden.

But perhaps we should back up a bit and clarify that the phrase “spider lilies” doesn’t actually denote a single plant species. Instead, it encompasses a number of different plant species that belong in the family Amaryllidaceae.

The family in which spider lilies belong produces the following genera:

Of all the different spider lily species, the Lycoris radiata is probably the most common.

This post shall address the growth and care of spider lilies in general, but with emphasis placed on the Lycoris radiata species. 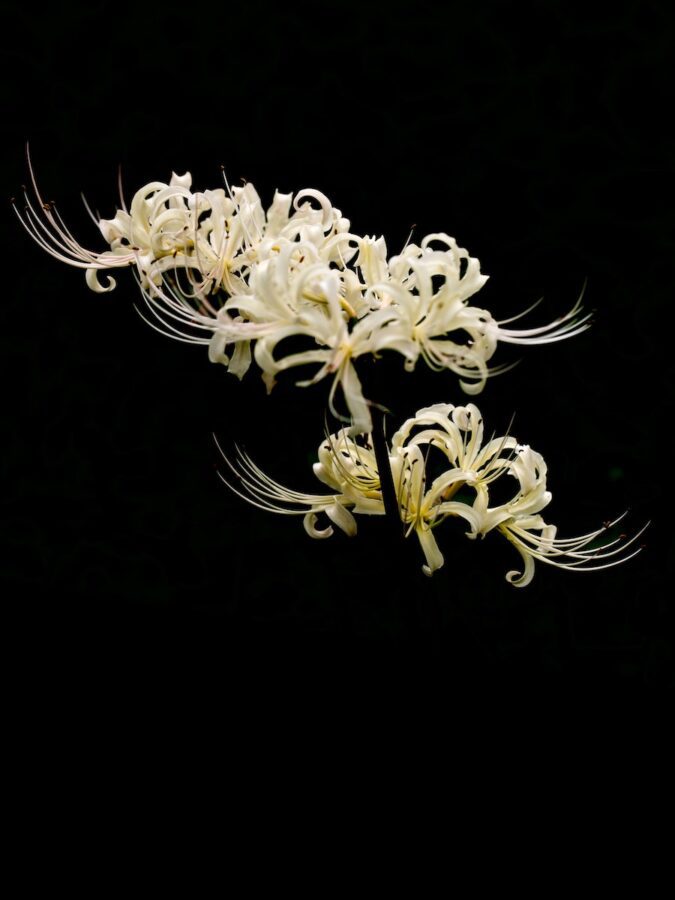 There are numerous reasons to add spider lilies to your home garden.

First off, spider lilies are unmistakably gorgeous. Most spider lily varieties produce bright, radiant blossoms that are sure to transform your garden into an idyllic spectacle. Lycoris radiata is especially noted for its bright red flowers characterized by long stamens.

Another reason to add spider lilies to your garden is that these plants are considered late bloomers. Spider lilies generally bloom around late summer or early fall. As such, they can leave your garden looking more radiant even after other plants are already past their annual flowering stage.

Last but not least, spider lilies are incredibly easy to grow and take care of. These lilies are fairly resilient and can thrive in various climatic regions around the world. That explains why they trace their origin in China, Nepal, and Korea but are now fairly widespread in the United States, Japan, the Seychelles, and elsewhere.

There are at least 200 officially documented species under the “spider lilies’ group of plants.

The plants share near-similar physical characteristics, with Lycoris radiata being the most widely-recognized species.

Spider lilies derive their name from their spider-like blooms.

But unlike spiders which inspire fear in most people, spider lilies are a spectacle to be loved by any flower enthusiast.

Spider lilies are perennial plants that produce flowers with exceptionally long spider-legged stamens. The flowers can range from red to white, yellow, and even purple. It all depends on the specific species of spider lilies in your garden.

Strange, however, is the fact that spider lilies do not produce foliage when in bloom. Instead, their leaves die back in early summer. The plants will exist inconspicuously in your garden until fall, when blooms emerge again from the bare ground.

How to Grow and Care for Spider Lilies 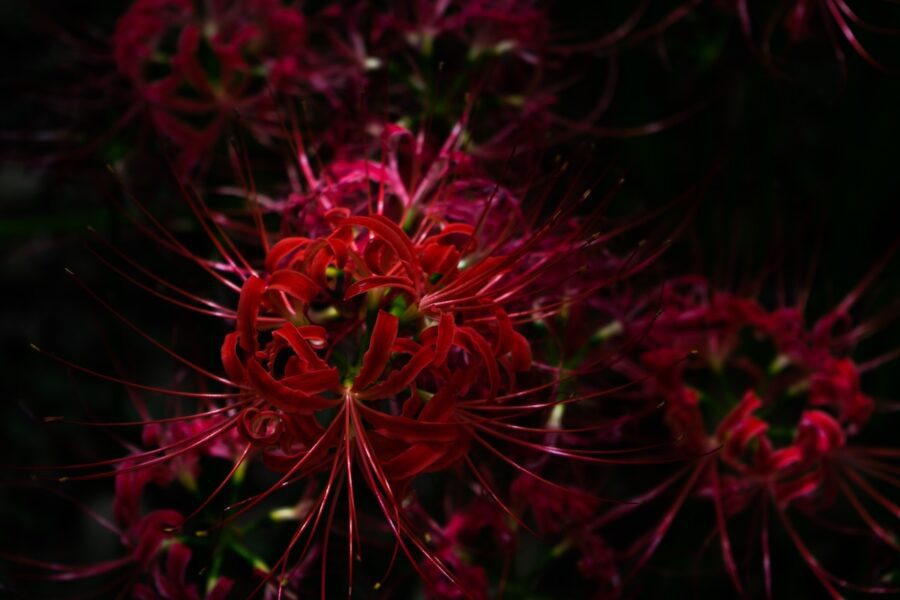 We’ve already done a pretty good job at popularizing the red spider lily, also known as Lycoris radiata. The red spider lily grows umbels of 4 to 6 coral-red flowers, with each flower able to grow as large as 24 inches wide.

But besides Lycoris radiata, there are hundreds of other spider lily species to consider. Examples include the white spider lily (Lycoris albiflora) and naked ladies (Lycoris squamigera).

Spider lilies are bulbous plants, which implies that they grow from bulbs. The lilies require little-to-moderate care after planting.

Each spider lily bulb can yield one to four plant stems. You can either grow the bulbs in above-ground containers or by sinking the containers into the soil.

The best time to plant spider lilies is during fall or in early spring.

Also, ensure the container has drains underneath it as well as on its sides. This prevents waterlogging while also allowing the plant’s roots to penetrate deeper into the soil.

Whether growing your spider lilies in above-ground containers or planting them directly into the soil, follow the below guideline:

• Dig a hole about 8 inches deep, then place the spider lily bulbs pointed end up and in a manner that their necks are a few inches above the soil surface.
• Plant the bulbs about 6 – 12 inches apart.
• Plant in mass to increase the germination rate.
• The best spots for spider lilies are areas between a woodland and a lawn.
• Also, plant spider lilies among spring-flowering plants so that your flower bed can have color in the fall and beyond.

Related:  An Easy Guide on Growing a Tradescantia Pallida at Home

Spider lilies will do best in moist but loose and well-drained soils. The soil should also be nutrient-rich and slightly alkaline.

Adding compost from time to time will offer the much-needed nutrient boost to the plants while also promoting soil drainage.

However, fertilization should only be done to established plants. Avoid fertilizing newly-planted bulbs. This could cause the leaves to wither or delay the flowering process. 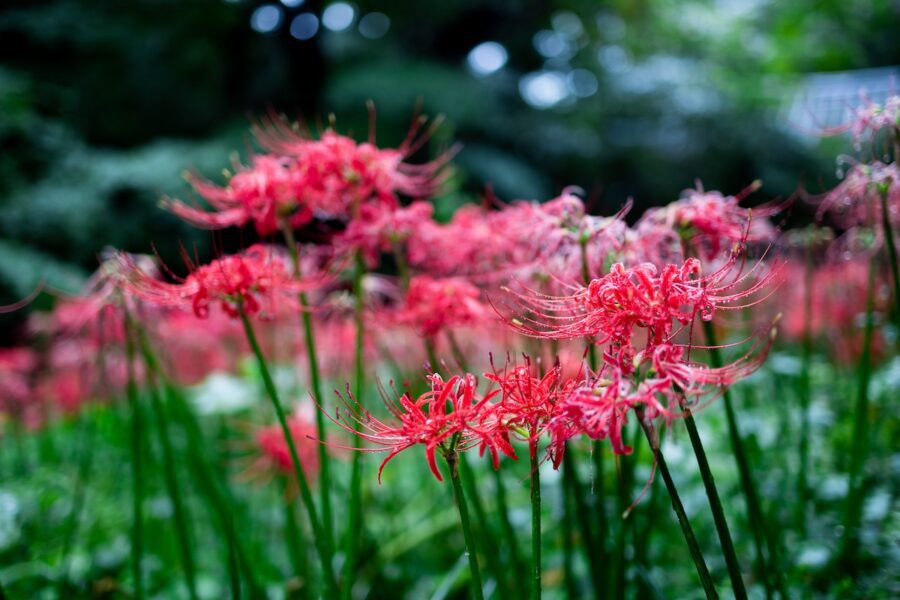 Regular but moderate watering is recommended after planting spider lilies. This should continue until new growth emerges from the bulbs, as well as throughout the growth and flowering stages.

Stop watering in summer when the leaves start to go dormant. During this period, watering only helps to keep the adjacent soil moist.

Spider lilies are sunshine-craving flowers and require a minimum of six hours of direct sunlight every day. To maximize their growth, ensure you plant them in spots with prolonged sun exposure.

However, spider lilies can also thrive in partial shade.

The conventional wisdom is to select a location in your garden that offers maximum morning sun and reliable afternoon shade.

Spider lilies may not thrive in very hot environments. However, they can cope with colder climates.

All you need to do is plant your spider lilies during fall or in early spring. The plants will easily withstand winter and summer weather in most countries.

But if you live in very cold climatic zones, adding a dense, dry layer of mulch may help to cushion your spider lilies from the vagaries of winter. Alternatively, you could dig up the bulbs and take them out with some soil around their roots, then place the plants in shady and well-ventilated spots.

Relative humidity around 40 to 50% is considered ideal for spider lilies. The trick is to keep the conditions moderately warm and somewhat humid.

Not that you’ll always need it. But it might help to invest in a humidifier and dehumidifier if you happen to live in zones with highly fluctuating humidity. 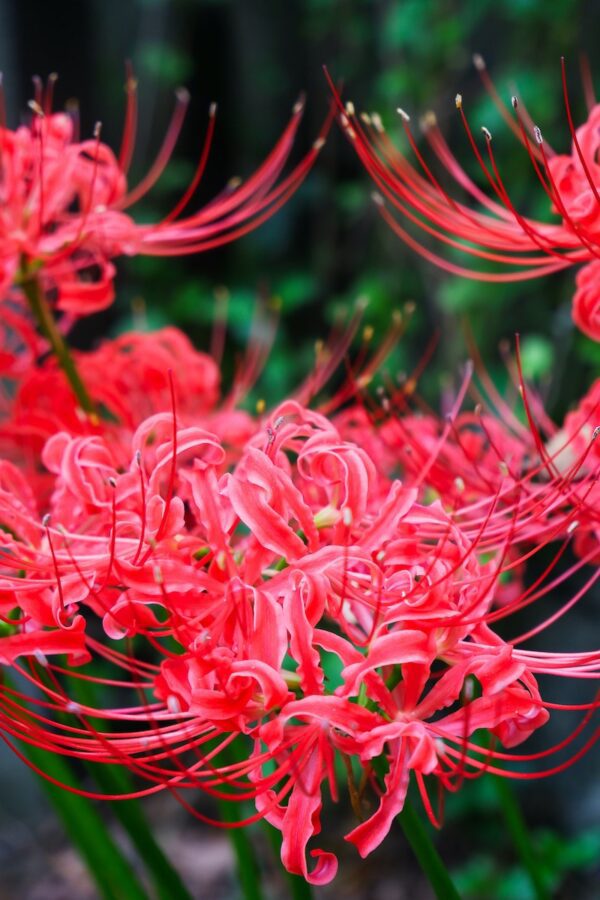 Spider lilies are fairly resistant to pests and diseases. In fact, larger pests like deer tend to find the taste of spider lily leaves quite repulsive.

However, spider lilies may attract birds, bees, butterflies, and a host of other winged animals. The good news is that these animals are mostly foraging for nectar. They’re unlikely to inflict serious damage to your tender spider lily plants. If anything, these animals enhance pollination in their quests for nectar.

Only slugs are known to bother spider lily plants.

It’s important to move with speed if you suspect that your spider lilies are under attack from slugs. That’s especially true for young plants.

The best way to address the slug problem is by placing small beer containers around the spider lily plants. Slugs are highly attracted to beer and will crawl into the container and hopefully get stuck.

For the best results, fix the container firmly into the soil to prevent it from getting knocked over by larger animals. However, leave at least one inch sticking out.

Spider lilies do not require extensive pruning. The only time you’d need to prune the plant is when the leaves turn yellow and wither.

Another important maintenance procedure is dividing the bulbs. Always endeavor to divide and separate spider lily bulbs every seven years to prevent crowding. Note that new bulbs develop really quickly and the ensuing competition for nutrients may cause some of the plants to wither and die off.

To divide spider lily bulbs, you’ll need to dig the area where the bulbs were planted. The best time to undertake this exercise is during summer when the spider lilies go into dormancy. Dig around the planting site and gently remove the bulbs from the soil. Be sure to lift the bulbs along with their entire root system. You can then replant the bulbs if required.

Spider lilies are late-blooming plants noted for their colorful blossoms. These plants can give your garden a vibrant look long after other flowers have bloomed.

And as you may have gathered by now, spider lilies also happen to be incredibly easy to grow and care for.