There are simply no words that can ever fully quantify or qualify the feelings of euphoria when the first leaf of your first garden plant begins to emerge from the earth.

After carefully providing the right combination of fertile soil, water, and optimum supply of warm sunlight, there’s nothing more fulfilling than seeing those small, pretty green leaves signifying the birth of a new life.

However, the journey has only begun.

Like all other forms of life, plants require intense care, love, and nurturing to overcome the various harsh conditions that would arise to stifle or stunt their growth. There are many factors that can negatively hinder your plant’s growth and development, namely pests, diseases, and environmental conditions.

As our world evolves each day, different solutions have been proffered to the bewildering challenges and hurdles many farmers and gardeners face while cultivating plants or flowers of their desire. One of the most troubling is, of course, the issue of pests. To a large extent, this has been solved using fabricated chemical pesticides, which you can readily find in the market.

Different pesticides have been created to kill, repel, or control certain forms of plant or animal life that are hazardous to the growth and development of plants. However, it is essential to note that chemical pesticides can sometimes be likened to solving a little challenge while unknowingly creating a more significant problem. Chemical pesticides pollute the environment and cause serious health risks after long-term exposure.

Thus, seeking alternative methods to eradicate the exposure or use of hazardous chemicals to protect the integrity of our environment while cultivating your plants is a significant priority. The best way to do this is to take advantage of biological organisms capable of reducing the population of pests without negatively affecting the growth of your desired population of crops.

Related:  60 Fancy Names To Give To Your Favorite Plant

With this in mind, I would like to introduce you to a group of insects that play a significant role in controlling and minimizing the agricultural pest population, the dragonfly. 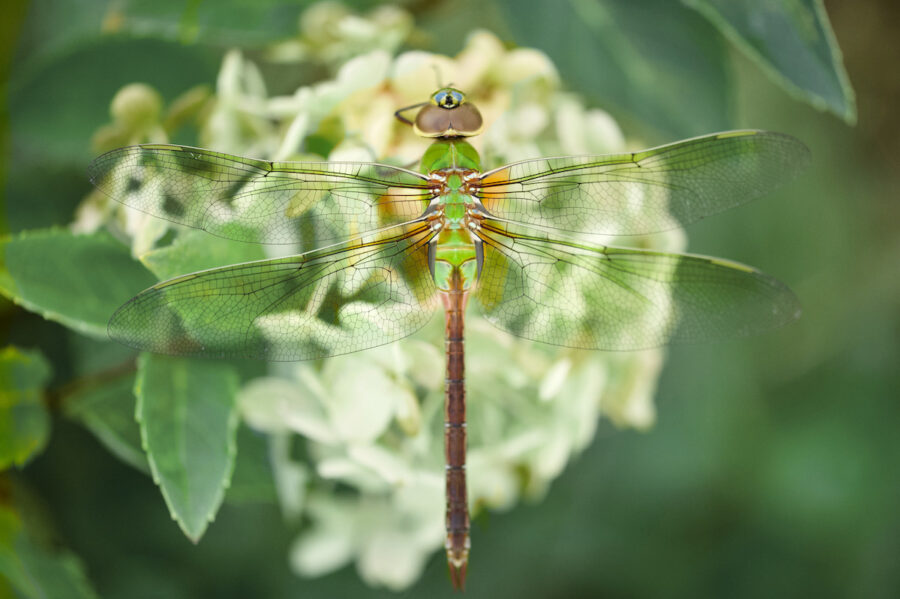 The dragonfly, also referred to as the “Devil’s Arrow,” refers to an aerial predatory insect, in the order of Odonata, which is commonly found near freshwater habitats. The most distinct feature of the dragonfly is its long, delicate, membranous transparent wings.

Occasionally, dragonflies are mistaken for damselflies, an insect that belongs to the same order as the dragonfly. However, dragonflies have thicker bodies and are sturdier than damselflies.

Dragonflies play significant roles across different traditions and customs as there are several mythical stories that either revere, admire, or fear them. In some cultures, dragonflies symbolize peace, prosperity, and good luck, while others see them as a symbol of deception and evil.

What mainly makes dragonflies interesting is their ability to voraciously consume a large number of gnats, biting insects, and mosquitoes, which often prey on garden plants.

Before harnessing this gift, you would need to know about the stages in the life of a dragonfly and understand how you can attract these valuable insects into your garden. 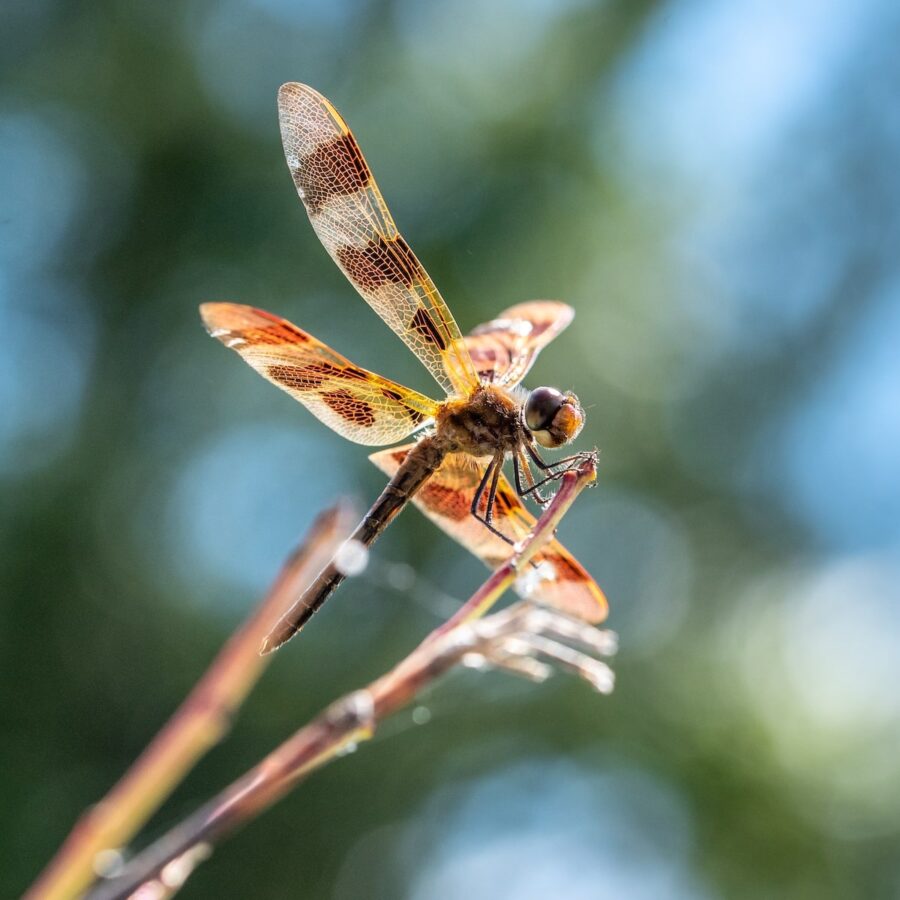 Elementary biology has established that all living organisms pass through different life stages until they peak at maturity and inevitable death. The dragonfly’s lifecycle is divided into three stages—the egg, the nymph, and the adult.

The lifecycle generally begins in the egg phase or stage. After mating between the male and female dragonflies, the female dragonfly deposits her eggs at a stationary or stagnant point, either in still water or in a pond. Usually, these eggs take about one to five weeks to hatch before the nymph stage.

The nymph stage is considered the longest stage in the dragonfly lifecycle. A dragonfly can spend about two years underwater in this stage, feeding on small insects, fish, and tadpoles.

After completing this stage, the dragonfly then moves to the edge of the stagnant pool of water and breathes air for the first time. The dragonfly then pushes its new body out of the old shell body and thus emerges as the adult dragonfly, which feeds on some of the insects you would love to eliminate from your garden. We only see dragonflies during this stage, which lasts for about six months. 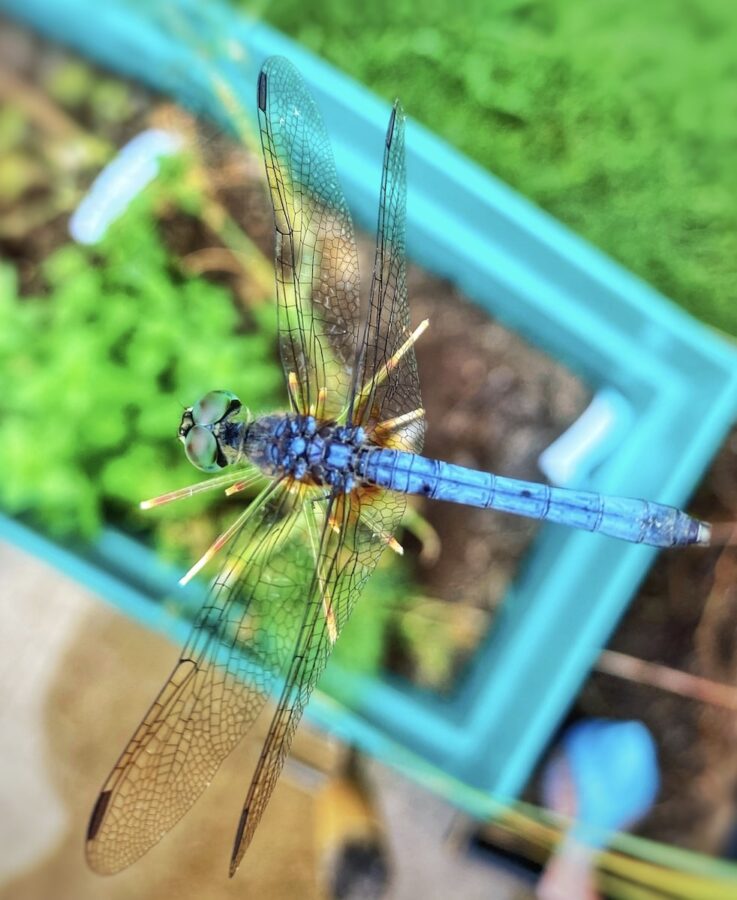 Now fully equipped with knowledge on dragonflies and their lifecycle, the next important thing is to consider how you can attract these insects to your garden. The listed points below give precise, concise mechanisms via which you can facilitate this.

Provide A Stagnant Source of Water

As earlier stated, the dragonfly spends most of its lifecycle underwater. The best way to attract these insects would be to provide a stationary water source where the female dragonfly can lay and hide her eggs till they hatch. This water source can be a pond near your garden or a small, manageable water source in a barrel in the garden.

Since dragonflies mostly grow in swampy areas, avoid clearing and cleaning this pond as these insects prefer murky water. Also, the dragonflies are incredibly vulnerable when they first emerge from a pond or stream as an adult. As such, you should design your water features rocks and varied vegetation either in or around the water to give them hiding spots before their soft bodies harden up.

Related:  How to Grow a Thick Hedge

Cultivate Plants That Will Attract the Dragonfly

With all of these in mind, drawing in the Devil’s Arrow to feast on those pesky insects that keep hindering your plant’s growth has become much easier and less hazardous! Establish a symbiotic relationship with them and begin to enjoy the benefits they provide in your garden!

This water feature will attract mosquitoes; however, there is an easy solution. A mosquito dunk containing Bti is an excellent way to solve this problem because it specifically targets mosquitoes.

Can dragonflies breed in gutters and places where there might be small amounts of water?

No. Dragonflies generally require more water surface than are available in ditches and gutters.

Why are dragonflies attracted to cars, not just insects?

Dragonflies generally use polarized light to recognize water surfaces. The paint on cars tricks them into believing they are standing on stagnant water.

What kind of plant can be used to attract the dragonfly?

Vertical plants such as the top of tall grasses make ideal points for them to perch and scout for their prey.

Are there organisms that eat the dragonfly?

Dragonflies are highly vulnerable to birds and other predators, especially when they first emerge from the nymph stage.