Lavender needs no introduction. At least not among flower enthusiasts.

Considered one of the world’s most iconic flowering plants, lavender is mainly prized for its irresistible flower fragrances. That explains why the plant attracts pollinators from far and wide.

But as you shall find, lavender’s enchanting fragrance isn’t the only thing to love about this plant. Extracts from the plant have also been used from time immemorial in traditional medicine.

And like most flowering plants, lavender can add a colorful ambiance to your home garden when in full bloom. Lavender plants typically bloom from early May and June through late summer or early fall.

However, what most flower enthusiasts don’t realize is that there are about 40 variants of the lavender plant. Common ones include English lavender, Portuguese lavender, Spanish lavender, and fernleaf lavender.

The Spanish lavender remains one of the most sought-after lavender cultivars. It differs slightly from its cousins in terms of physical characteristics, habitat, and ideal growing conditions.

While your home garden would do well with any lavender variety, you should probably give a higher priority to the Spanish cultivars. Read on for a definitive guide into growing and caring for the Spanish lavender. 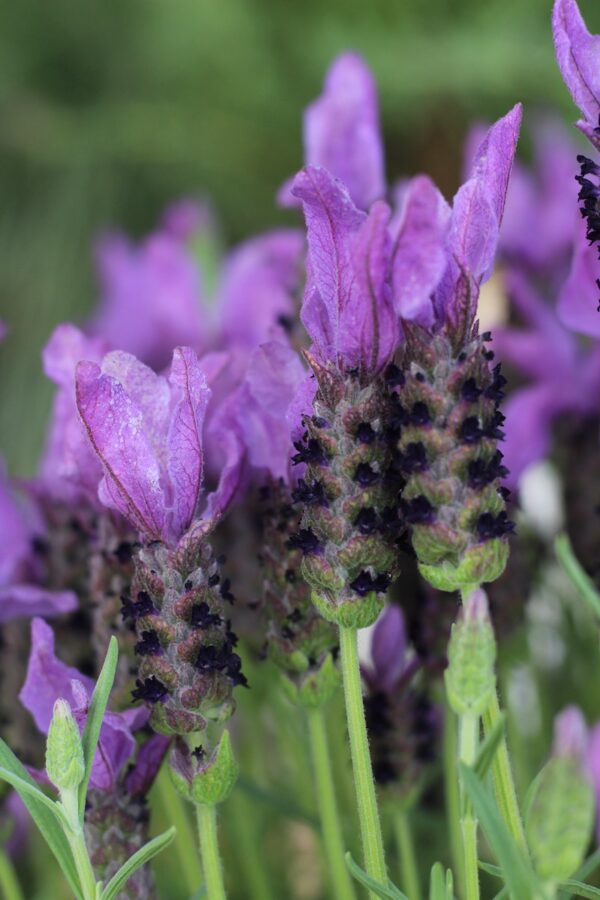 Lavandula stoechas grows natively in the hot, dry Mediterranean climate. The plant is widespread in Mediterranean countries like Spain, France, Portugal, Greece, and Italy. But like all lavender species, the Spanish lavender does fairly well in other climatic regions around the world.

Why Add Spanish Lavender To Your Home Garden?

All lavender plants are famous for their charming beauty. The plants also possess near-similar physical characteristics. They grow in small shrubs, which makes them perfect for planting around bed borders and low hedges. They’re almost immediately identifiable by their silvery green leaves. However, lavender cultivars vary in terms of how they flower. The Spanish lavender, in particular, stands out for its beautiful pineapple-shaped bluish-purple blossoms with colorful bracts. The bracts resemble “bunny ears” and emerge from within the flower spikes. Spanish lavender plants can turn your home garden into a spectacular beauty when in bloom.

Another reason to add Spanish lavender to your home garden is that these plants are incredibly fragranced and can attract all kinds of natural pollinators. However, note that Spanish lavender plants exude much of their aroma through their leaves and not their flowers.

When it comes to cultivation, the Spanish lavender is a welcome alternative to the English lavender if you live in warmer climatic regions. In fact, the plant isn’t so picky and can thrive in a wide range of soils and climatic conditions.

Lastly, like all lavender species, Lavandula stoechas also contains immense medicinal and culinary properties. The plant is especially used in the manufacture of essential oils, deodorants, insecticides, and a host of beauty and skincare products. As a medicinal herb, lavender is highly acclaimed for its sedative properties. Applying lavender-infused ointments before bedtime might boost your sleep by shortening your sleep onset time. Lavandula stoechas extracts may also help to relieve headaches, anxiety, nausea, and feverish colds.

Related:  How to Braid a Money Tree Like a Pro

A Guide Into Growing Spanish Lavender 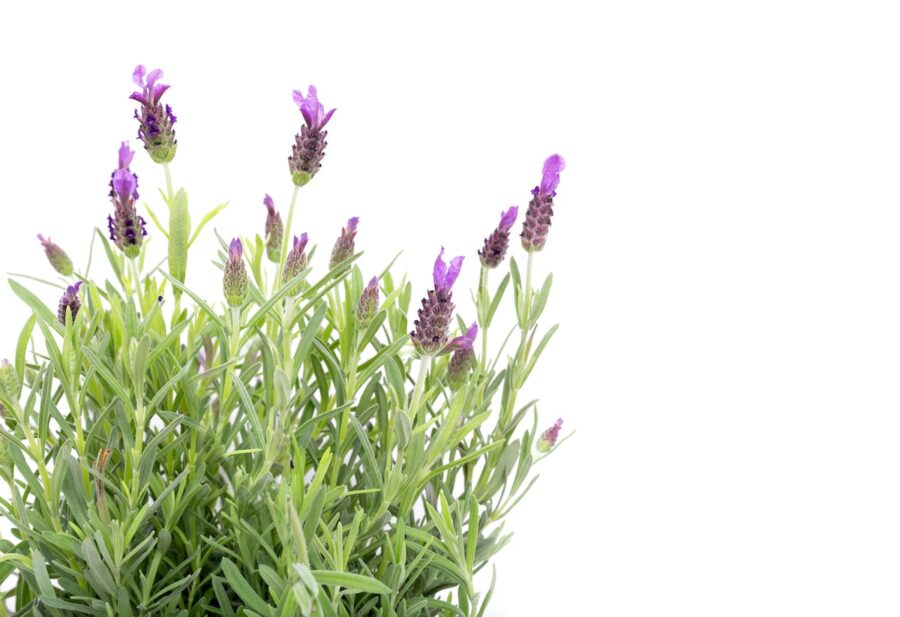 Lavandula stoechas pedunculata is the most common subspecies of the Spanish lavender. It grows natively around the coastal regions of the Mediterranean as well as on the Atlantic coasts of Spain and Morocco.

Lavandula stoechas luisieri is more widespread in Portugal and some parts of Spain.

While it doesn’t hurt to know the specific Spanish lavender subspecies you’re dealing with, it’s important to note that the growing and care instructions are pretty much the same for both cultivars. In fact, Spanish lavender growing and care guidelines are largely similar to those of other lavender species. Except for the fact that Lavandula stoechas is a bit more heat-resistant. Also, the plant doesn’t require cold to enter the flowering stage.

Spanish lavender is an evergreen shrub that typically grows to a height between 30 and 100 centimeters, depending on the subspecies. The Lavandula stoechas luisieri can achieve a height up to 2 meters.

Spanish lavenders are characterized by their silvery green leaves that measure 1 to 4 centimeters long. When in bloom, the plant produces pineapple-shaped bluish-purple flowers, which are crowned by a mass of bracts.

3. Know When and How to Plant 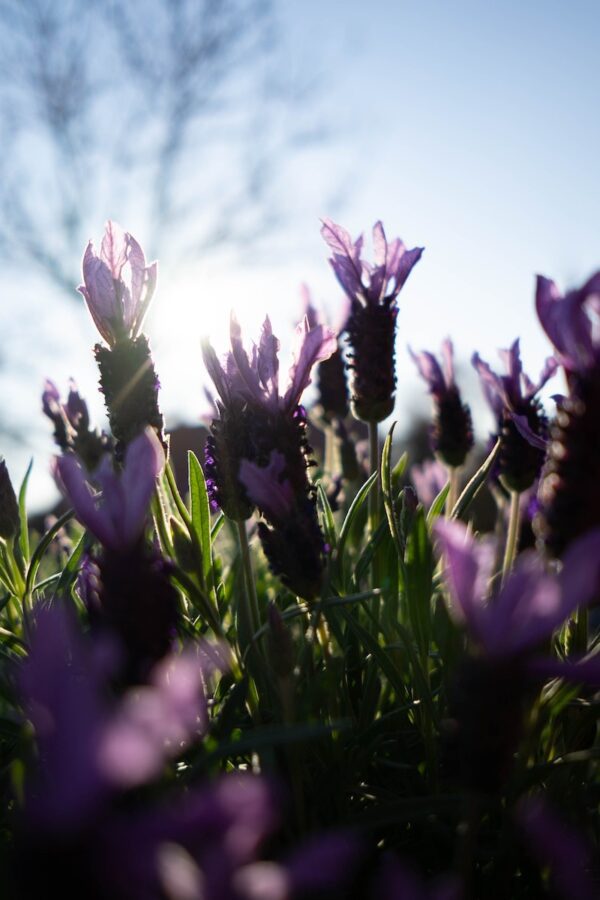 a) Growing From Seeds versus Seedlings

As with any plant, the first dilemma when planning to add Spanish lavenders to your home garden is deciding whether to grow the plants from seeds or seedlings.

Note that it’s a bit difficult to grow Spanish lavender from seeds. That’s because seeds may take up to three months to germinate.

If you can’t seem to find small Spanish lavender starter plants, you can still opt for seedlings. Just be sure to keep the seedlings in a sunny spot and water them regularly or whenever the top soil inch becomes dry.

After one or two weeks, harden the plants by moving them to a partially shaded spot outdoors. However, only do this when the weather is relatively warm (about 60 degrees Fahrenheit). Continue watering the plants for a week or two before finally planting them in a permanent, desired spot in your garden.

Related:  How Do I Grow A Pomato Plant?

Mature Spanish lavender plants can get a bit bushy. To avoid crowding and undue competition for nutrients and sunshine, space the plants about 18 to 24 inches apart.

You might also consider adding mulch to control weeds. Rock or pea gravel will be particularly effective here.

c) When to Plant

The Spanish lavender (or any other lavender species for that matter) is best planted in the spring.

You’ll need the soil in your garden to have warmed up to at least 60 degrees Fahrenheit before planting your Lavandula stoechas seedlings. This helps to prevent the risks of frost.

If planting Spanish lavender in the fall, consider larger and more established plants. This increases the plants’ survival during winter.

Spanish lavender thrives in well-drained soils. You can fix the problem of poor soil drainage by mixing some gravel or sand into the soil right before the planting season.

Alternatively, consider growing the plants in raised beds, mounds, or sloppy sections of your garden.

However, note that the Spanish lavender can do well in most soil qualities, including loamy and even alkaline soils.

Spanish lavenders are fairly hardy and can grow without any fertilization, provided that the soil texture is right. The only time you’d need to fertilize the plants is during the first time you plant them.

If you must add fertilizer to mature Spanish plants, only do so occasionally and when there are evident signs of malnutrition.

In terms of pH levels, Spanish lavenders do well in fairly alkaline soils with a pH range between 6.7 and 7.5. If the soil is too acidic, your plants will surely die off. 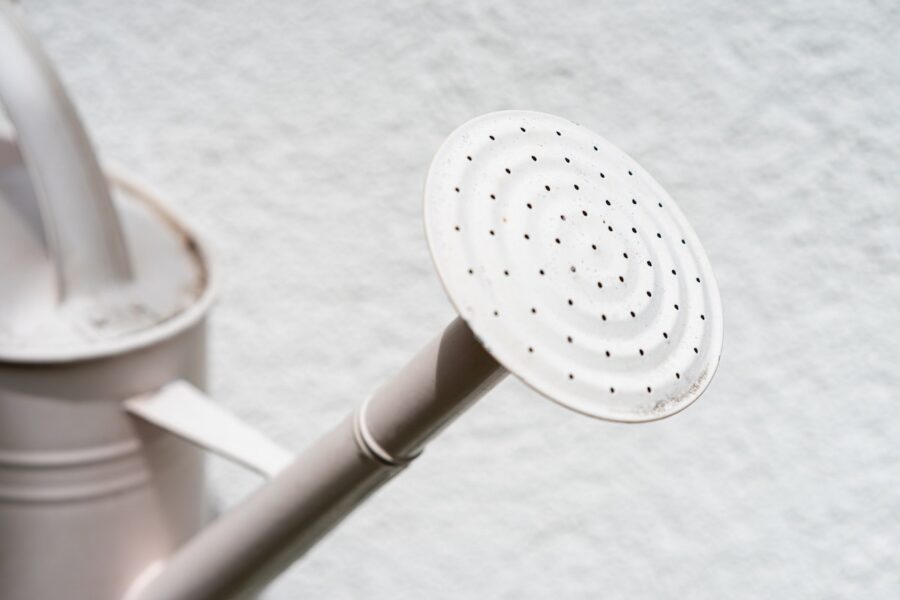 Mature plants would need supplementary watering once every two to three weeks until they form buds. After that, you can water them once or twice a week until flowering or harvest.

Related:  How to Care for your Elephant Ear Plant (Alocasia Amazonica)

Lavandula stoechas grows natively in hot, dry, and sunny conditions. The plants require at least six hours of direct sunshine every day, and even longer during their flowering stages.

If growing Spanish lavender in colder climates, you may have to winter-protect them. You can do that by covering the plants with a mulch of straw to insulate them from cold.

Alternatively, you could grow the plants in a pot. That way, you can keep them outdoors during summer and indoors during winter.

Spanish lavender plants are best pruned in the autumn or whenever green leaves emerge from the plant’s base.

The best way to prune these plants is by cutting about one-third of the top. Take care not to injure the main stems.

After pruning, leave the foliage on the plants over the winter to cushion new growth from frosts. 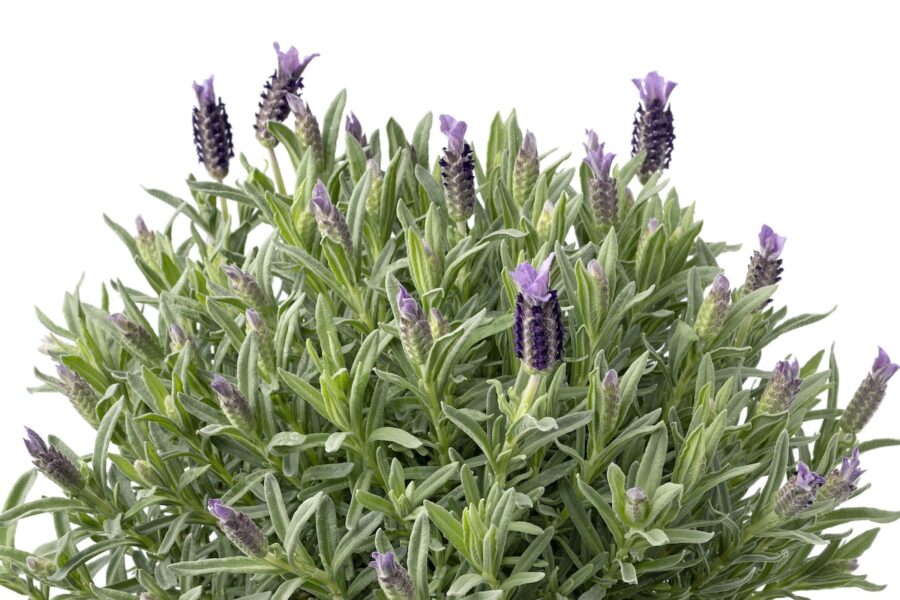 Spittlebugs are the only known destructive pests attracted to Spanish lavender. But even these bugs usually cause negligible damage.

In terms of disease, Spanish lavenders are mainly troubled by fungal problems.

Fungal diseases are common in humid climates. Adequate air circulation may help keep the risks of these diseases low.

Propagating Spanish lavenders is an extremely hassle-free task. It mainly involves cutting a stem that’s about 6 inches long and dipping the cut section in a suitable root hormone.

After that, stick the step in a container or pot filled with potting soil.

Place the container in partial shade until the roots begin to form from the stems, after which you can transplant them to a desirable spot in your garden.

The best time to harvest Spanish lavender is after the blossoms begin to show deep color.

Cut the stems in the cool morning hours after dew has dried off. Place the cut flowers in a cool and dark area to preserve their texture and fragrance.

Also, be sure to sterilize the cutting blades using rubbing alcohol before and after harvesting Spanish lavender. This helps to prevent the spread of the disease. 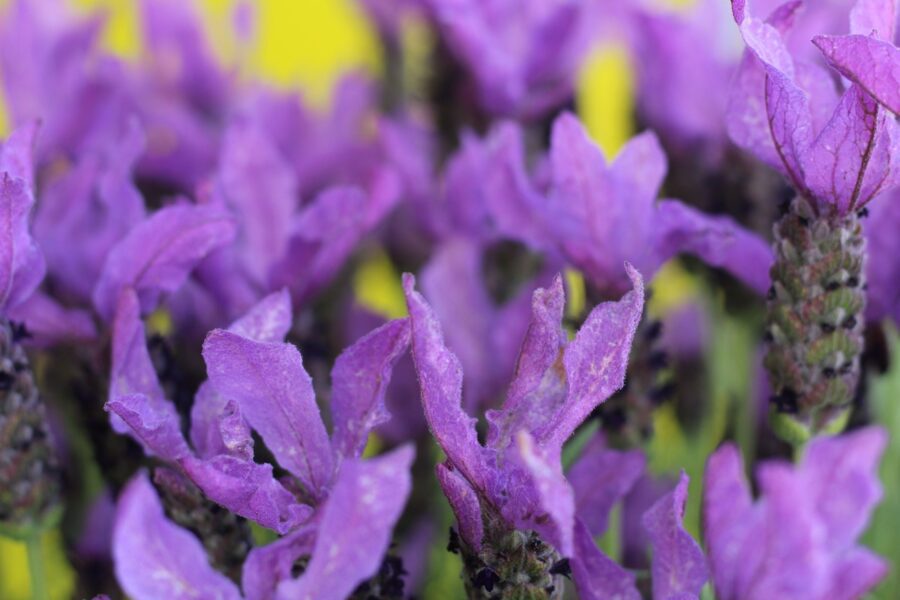 Spanish lavender is one of the top lavender varieties to have in your home garden. Not only for its stunning blossoms but also its inviting aroma and a host of therapeutic benefits.

What’s more, Spanish lavender is also relatively easier to grow and care for than other regular lavender cultivars.