What Are House Worms?

I would be speaking for most homeowners if I said that every home experiences house worm infestation from time to time. But perhaps we should back up a bit and try to understand exactly what constitutes house worms.

Right off the bat, it’s important to point out that there’s no specific organism known as a house worm. The term is largely used to refer to any worm that can invade our living spaces and make life a little unbearable. These could range from earthworms and roundworms to millipedes, centipedes, to mention but a few.

However, numerous worm varieties like earthworms rarely infest houses. That’s because such worms live in the soil outdoors and will only venture into our living spaces when foraging for food. After feeding, they’ll be happy to retreat to their natural habitats. The house worms most likely to become problematic are millipedes.

If you keep sighting small, grayish-brown worm-like creatures roaming freely on your floor, the chances are that your house is infested with millipedes.

Read on for everything there is to know about millipedes infestation. Some of the areas the post shall address include the environmental conditions that millipedes thrive in, how they end up in our houses, and what you can do to prevent them from making your home their breeding ground.

More About Millipedes: Appearance and Identification 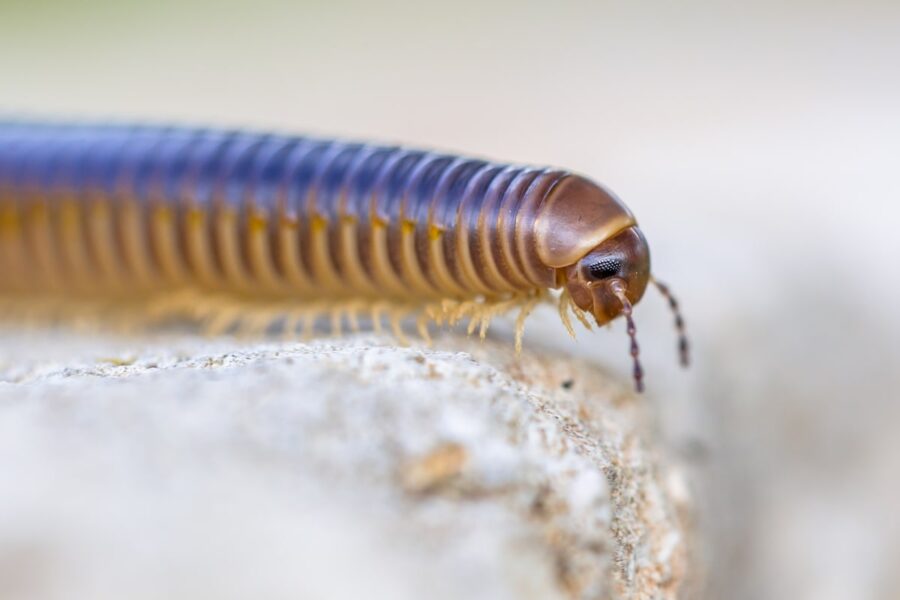 Millipedes, also known by numerous other names like diplopods and thousand-leggers, are a group of arthropods characterized by two pairs of jointed legs on most of their body segments.

Most millipedes feature very elongated, usually flattened or cylindrical, bodies. Their bodies are vastly segmented. The number of segments can range from as few as 11 to as many as 100+.

In terms of color appearance, millipedes are generally brown or black. However, you may also encounter a few brightly colored varieties.

Millipedes vary in length from 2 millimeters (1/16 inches) to around 35 centimeters (14 inches).

While the prefix milli- resonates with 1000, there’s actually no documented millipede with a thousand legs.

The millipede that holds the record for the highest number of legs (750 in total) belongs to the Illacme plenipes species. Most species have legs ranging between 34 and 400.

Millipedes Habitat, Behavioral Characteristics, and How They Find Their Way Into Our Homes

What Is a Millipede’s Natural Habitat?

Millipedes are among the most widespread worms in the world. They’re fairly distributed in all continents, except Antarctica.

Millipedes thrive in all terrestrial habitats. However, these worms are more suited for forest living. They prefer wooded vegetation or areas with tall grass. You’ll normally find them in dead wood, leaf litter, or in the soil.

In terms of ideal climatic conditions, millipedes generally prefer cool, humid environments. But as we’ve already indicated, these worms are ideally suited for most climatic regions.

In temperate zones, millipedes are highly abundant in moist deciduous forests, where they can exist in densities as high as 1000+ individuals per square meter. Other common millipede habitats include coniferous forests, alpine ecosystems, and underground caves. There’s even a variety known as deserticolous millipedes, which are specifically suited for desert living.

In nature, millipedes hide in cool, damp, and dark places. Common hideouts include under mulch, under stones, beneath woodpiles, under plant debris, in flower pots, and under compost or leaf piles. But if outdoor conditions become too hot, wet, or dry, these worms may seek shelter in our living spaces.

What Attracts Millipedes In Your Home? 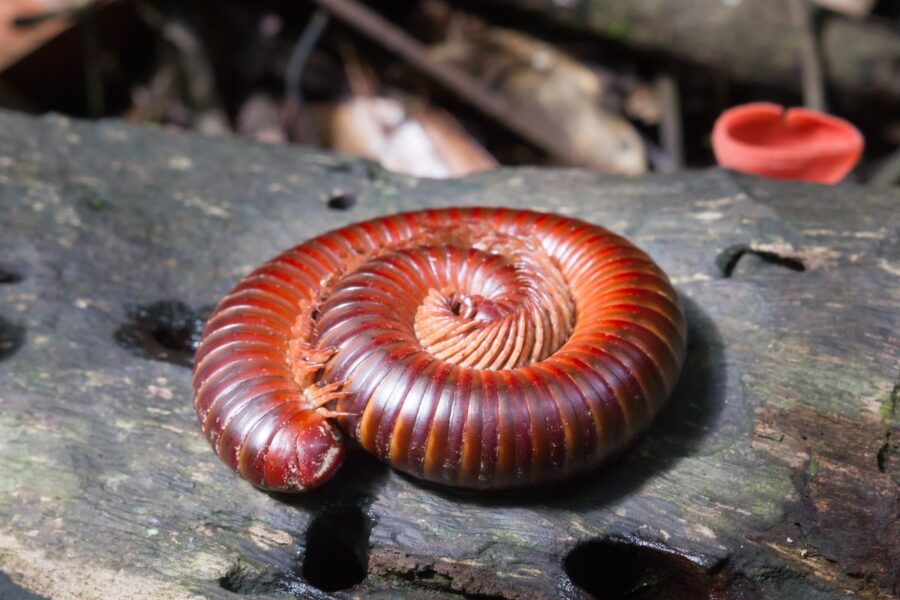 Moisture is the greatest factor that draws millipedes to our living spaces. Like all worms, millipedes prefer moist conditions because it promotes the growth of bacteria and mold on indoor surfaces.

Moisture particularly causes wood to rot. Note that millipedes feed on decaying plant matter. They may also prey on other insects drawn to the rotting wood.

In addition to moisture, relative cool and darkness are other factors that could draw millipedes to your house. This explains why these worms are generally found in the basement, garage, or crawl spaces full of rotting organic matter.

Related:  What Are Meat Bees (Yellow Jackets) And How Do You Get Rid Of Them?

How Do Millipedes Enter Your House?

Millipedes will typically enter your house through doorways.

They may also use cracks and crevices on the walls or foundations.

To determine if your house has been infested with millipedes, you’ll need to take a close inspection of the common areas these worms are known to hide. These include in the basements and dark crawl spaces.

You’ll then be able to tell that your house is infested if you spot hard, shell-like remnants of deceased millipedes.

Also, note that millipedes are nocturnal. So, if your house is already infested, a night inspection in the mentioned places will turn up plenty of live millipedes roaming about foraging for food.

How to Get Rid Of Millipedes in Your House 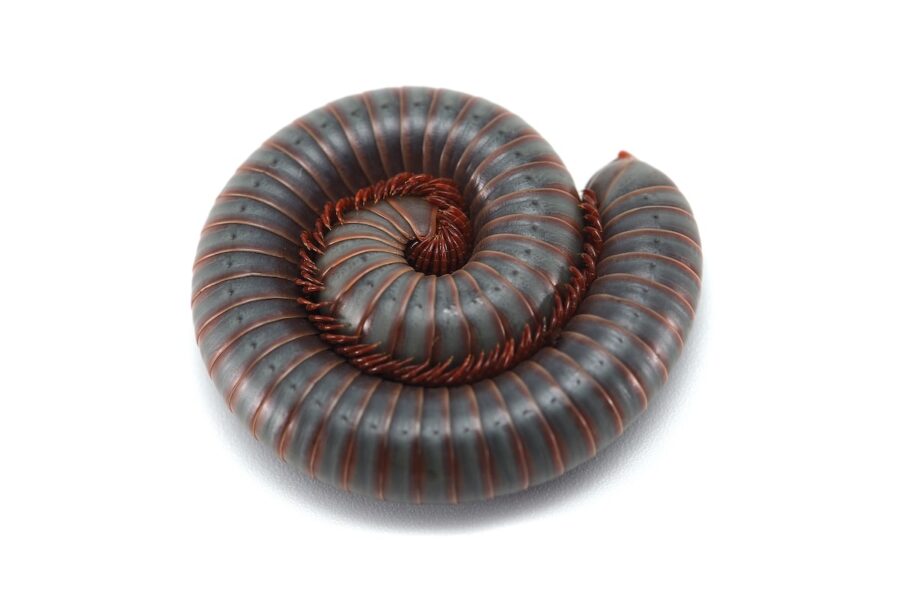 In most cases, millipedes will stick around your house because they cannot trace their way back out.

But these worms cannot endure the often dry indoor environments in most homes. They’ll simply die off in a few days.

So, one way to get rid of them is to simply wait them out. To further escalate the elimination process, you can consider sweeping the millipedes you encounter with a broom or vacuum. You can even pick them up with your hands and take them outside.

If you’re not patient enough to wait for millipedes to die off, you can consider spraying them with pesticides.

Insist on pesticides labeled ‘organic,’ ‘biodegradable,’ or ‘pet-safe.’ These products are designed to eliminate pesky pests and parasites without exposing other household members to significant health risks.

Besides applying the pesticide directly on the areas infested with millipedes, you can also spray it around potential entry points like the front door and basement crevices. This acts as a deterrent against future infestation by millipedes or other bugs.

NOTE: Always engage professional pest control experts if you’re ever in doubt as to the right pesticides to use.

Related:  White Mite Control: How To Get Rid Of It

Millipedes may prey on a number of insects. But these worms are also preyed on by numerous animals.

Most of these natural millipede predators are harmless to humans. And the best part is that they take care of millipedes outdoors, way before the worms can invade your living space and become problematic.
Preventive Measures

As with most pests and parasites, the most effective way to manage millipedes is to prevent them from invading your house in the first place. Fortunately, there are numerous ways to go about that.

• Seal cracks and crevices around potential entry points, paying particular attention to cracks in the walls and foundation.
• Seal the expansion joints in cases where patios, sidewalks, and sunrooms are just next to your house foundation.
• Repaint or treat all indoor wooden surfaces to prevent them from decaying during high humid conditions, thereby attracting millipedes.
• Get rid of all decaying organic matter outdoors; these include woodpiles, stone piles, grass clippings, and leaves on the gutter.
• Avoid piling mulch against your house foundation.
• Spray your backyard and outdoor garden using pet-safe insecticides.
• Practice good lawn care, which includes mowing tall grass, de-thatching where required, and avoiding excessive watering particularly at night.
• Clean and vacuum your house regularly, focusing on the basement and crawl spaces, as a way of detecting early signs of infestation.
• Use a dehumidifier or sump pumps to dry out your basement and crawl spaces.
• Repair broken drains, leaky faucets, and air conditioning systems.
• Arrange for scheduled property inspections to establish if your home is a potential breeding ground for millipedes and other bugs.

Millipedes are generally harmless. These worms do not bite. Neither are their defensive secretions toxic to humans.

However, millipedes can become an eyesore if they infest your home. Fortunately, there’s a host of tips you can implement to get rid of these worms and even prevent them from invading your house in the first place.