Did you know that there are more than 300 different species of woodpecker in the natural world? Not only that, but nearly 10% of them live in the United States alone. Since they are classified as migratory, nongame birds, they are protected under federal and state law, yet some have become endangered and almost completely lost due to the destruction of their habitats.

Regardless of this, it doesn’t matter where you live in the US, you will likely see a woodpecker of some kind, and knowing what variety of woodpeckers you are seeing is always fun. That is what this article is for.

Today we will not only give you a few fun facts about those pesky woodpeckers, but we will discuss ten different species in detail. That way, the next time you see a woodpecker in your area, you can impress those around you by telling them exactly what type it is! 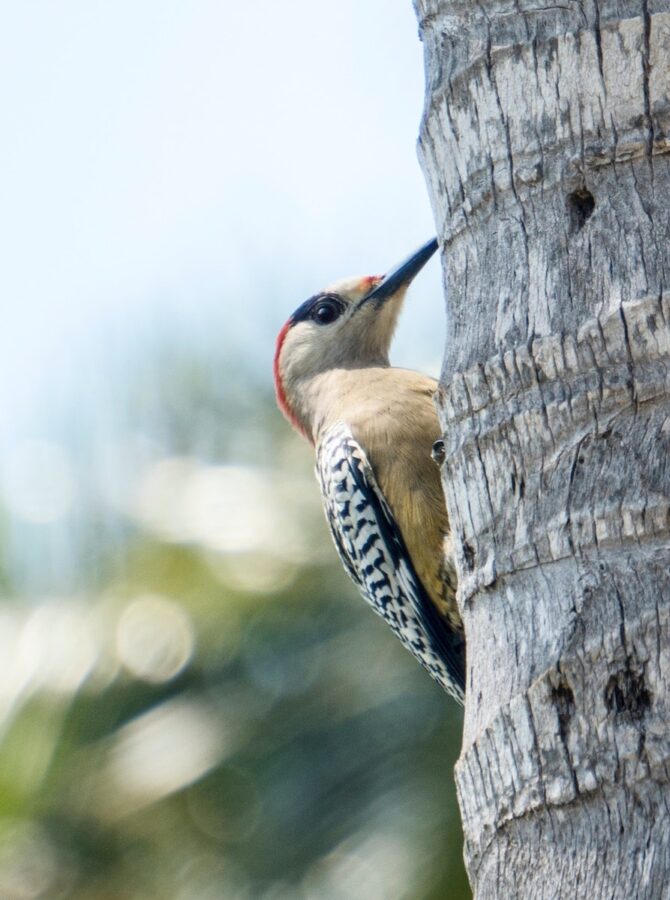 Why do woodpeckers peck at trees?

There is an assumption that woodpeckers peck away at trees because they are looking for food, which is true to an extent because woodpeckers live off of eating tree-dwelling insects. However, a woodpecker also pecks at trees because they are drilling to create a nest for themselves and their family. Similarly, a woodpecker will peck at a tree to warn off other creatures and mark its territory because most insects or smaller creatures do not like the vibration.

Does all of this pecking not hurt?

When woodpeckers are drilling for food, it’s forceful! They get hit with up to 1,400 g’s of force—14 times the amount that would trigger a concussion in humans. However, woodpeckers are particularly well-adapted for drilling on and into trees without getting a concussion. How so? Well, they have very thick skulls and these skulls are designed to absorb a lot of impact when hit.

Not only this but the skull and the beak of the woodpecker is shaped in such a way that when the bird hits the wood, the force of the hit is taken by the lower jaw rather than the skull.

Related:  A Complete Beginner’s Guide to Caring for Hoya Macrophylla

How does a woodpecker get its food? 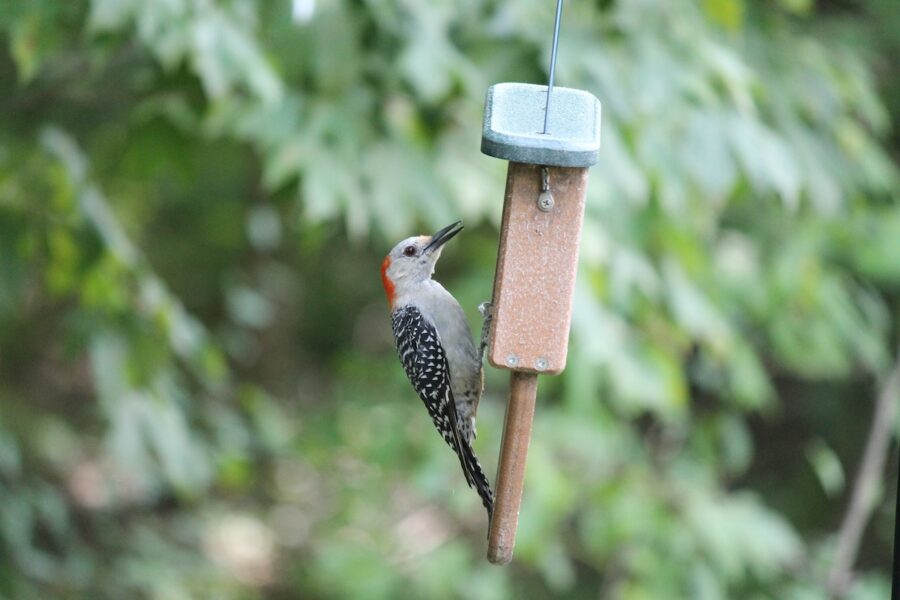 A woodpecker has a pretty unique tongue, it is long, barbed, and sticky, and is able to fit into small gaps within a tree and find insects.  Because a woodpecker’s tongue is so long, it wraps around the skull and through the bill when it’s not being actively used. Muscles contract and relax as the tongue is extended to grab larvae and then retracted.

How and why do woodpeckers create nests?

Woodpeckers nest in holes that they’ve bored about 5 to 50 feet up a dead or living tree. They excavate a round hole 8 to 16 inches deep in a gourd shape; there’s no lining except for a few wood chips and they lay 4 to 5 white eggs, which hatch in 16 days. Young remain in the nest about 20 days before fledging. 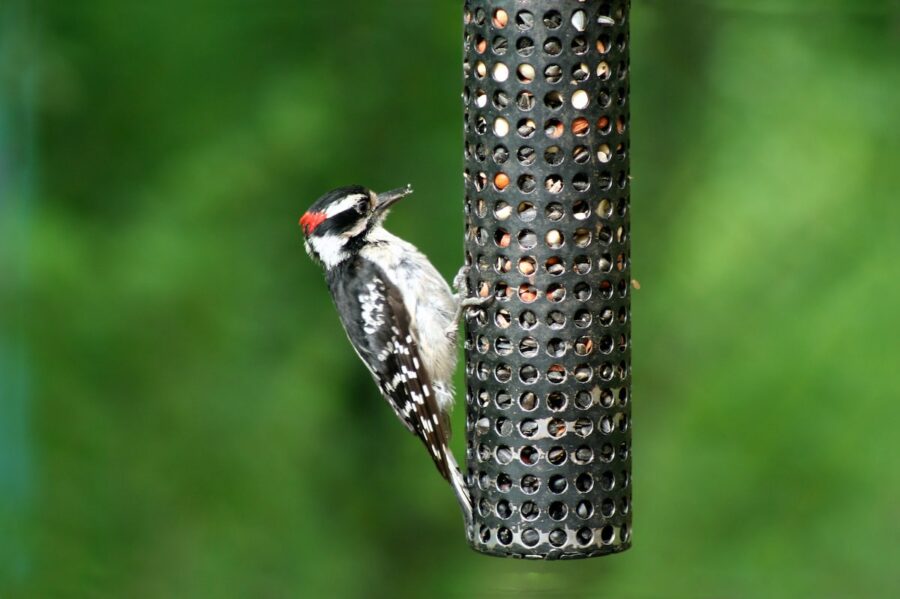 This rare and unfortunately declining woodpecker is found exclusively in open pine woodlands. These unique woodpeckers seek out pine trees with red-heart disease, a fungus that affects the heartwood and makes the wood easier for the woodpeckers to remove and excavate their elaborate nesting cavities. The red heart is a fairly common affliction of trees 70 years or older but today most pine forests are cut before trees reach that age. The open pine forests themselves are declining.

It is said that there are only four population groups of this woodpecker left, all located in the US, and as such, they have been classed as an endangered bird since the mid-1970s. This variation of woodpecker tends to be about 8-9 inches in height and is located in south-eastern US states. They live in open pine forest regions and are identifiable by their prominent white cheeks and black and white patterns. A male will often have a red spot on the back of his head.

Reaching a whopping 18-inches in height when fully grown, the Pileated woodpecker is the largest known species of woodpecker in the entire United States. These birds are easily identified by their size and their preferred habitat with large, sturdy trees that can support their exuberant drilling. More common in the eastern United States, pileated woodpeckers can be found in many north-western forests as well. While both male and female birds have red, moderately crested heads with bold white markings, the male birds also have a splash of red along their cheek stripe 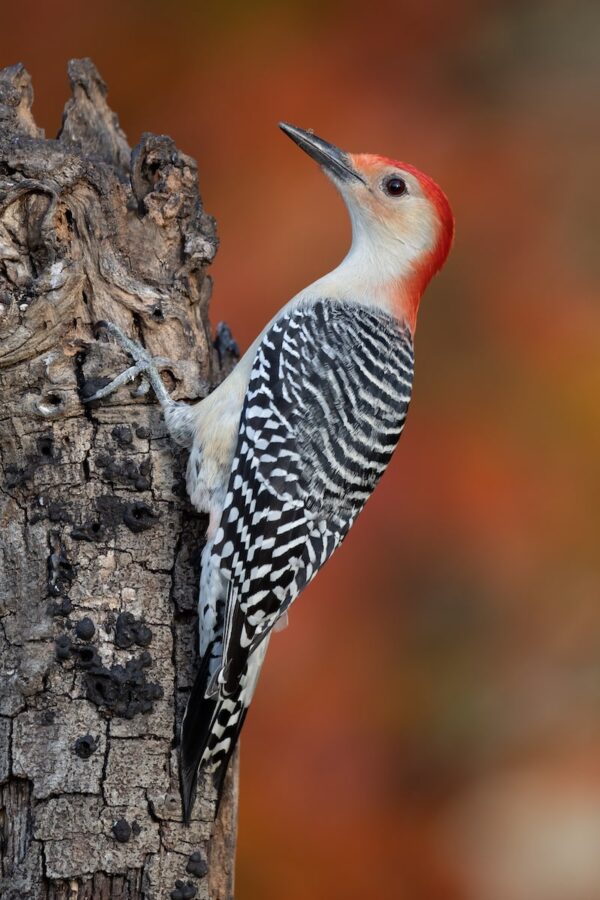 The name of this beautiful bird is misleading. Its belly is actually pale with tinges of red in the right light, and it has a black-and-white striped back with a bright red nape. Males also have a red crown. In the eastern United States where it lives, you’ll spot this bird picking at bark rather than drilling into it.

This variety of woodpecker is a little different to many others in that they are not bothered by humans, so if you wish, you can take many pictures of them or enjoy their company. They are truly beautiful birds.

Standing at around 10-11 inches, the Lewis’ woodpecker can be easily identified by its dark glossy-green head, its grey collar and breast, and its light pink/red belly/ It feeds on insects from tree bark or picked up during the flight and loves to feed on acorns. You can find them in the Western regions of the US.

This variety of woodpecker is very interesting, they will sit on wires and other perches out in the open, which other woodpeckers do not do. They are also very social and will typically travel and peck in groups. 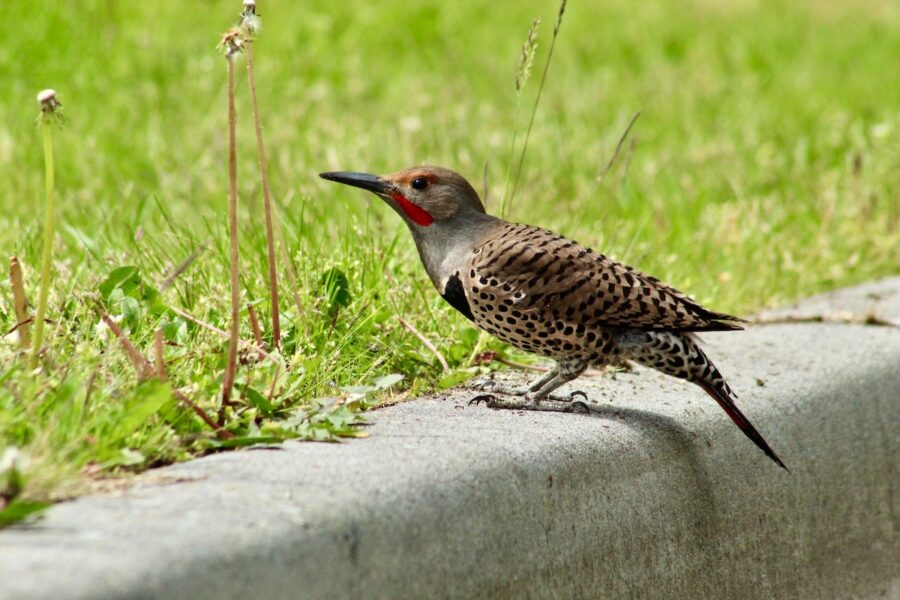 Yet another variety of woodpecker that is found in western regions, the red-shafted woodpecker is identified by a signature red moustache stripe on either side of its mouth. Also, when they are in flight, you can clearly see red-orange feathers on their underwing and tail. Red-shafted Northern Flickers also have a mostly grey face with a brown crown, whereas the Yellow-shafted variety has a brown face and grey crown.

Their behaviour can be seen as a little different to that of the average woodpecker because they tend to hunt for food like worms etc on the forest floor as opposed to in the trees. Not only this but red-shafter and yellow-shafter woodpeckers actually breed with one another, creating a hybrid type of woodpecker.

This stunning woodpecker certainly has a unique appearance, with its zebra-patterned body and speckles of yellow and red on its head. In the early days of the 20th century, this variety of woodpecker was actually seen as a pest and was hunted, so in modern times, it is a little rarer as a result. It is most commonly found in the open land of eastern Mexico, northern Central America, and sometimes Texas. The golden-fronted and red-bellied woodpeckers have been known to butt heads and aggressively defend their territories in areas where their habitats overlap. 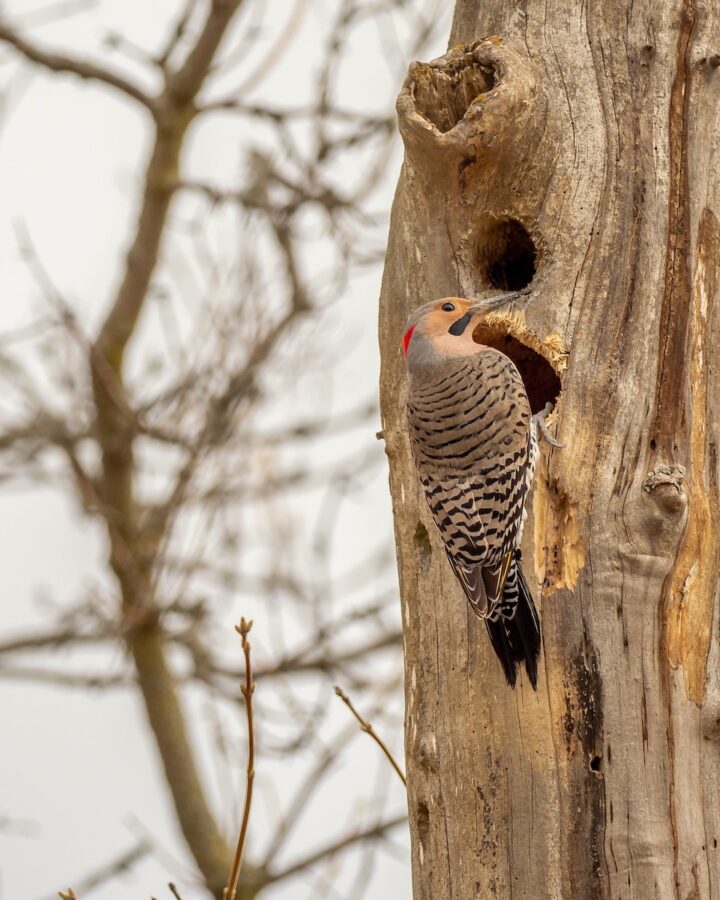 With markings unlike those of any others on this list, northern flickers have a black bib, spotted belly, white rump and a brownish-grey back patterned with spots, bars and crescents. Males also may show red or black whiskers, a red nape crescent and stripes of yellow or red throughout their tail feathers.

Related:  How Big Should A Birdhouse Entrance Be?

These woodpeckers are located across all of North America; however, they are one of the few North American woodpeckers that migrate. Birds in the northern parts of their range will move further south in the winter.

Sapsuckers are around 8-9 inches tall and are typically divided into four different categories, yellow-bellied, red-naped, red-breasted, and the ‘Williamson’. Each variety can be found in different locations all across North America and Mexico:

Yellow-bellied: Most of Canada and Mexico, the eastern half of the U.S.

Red-naped: Southern British Columbia throughout the western U.S. (excluding the coast) down into Mexico.

Red-breasted: Far western coast of Canada and the U.S.

Williamson’s: Along the Rocky Mountain corridor south into Mexico.

One interesting bit of information about these birds is that they don’t actually suck up any sap, they just lick it. Sapsuckers will usually drill holes in the tree trunk and when any sap leaks out, they simply lick it up. This sap also attracts insects which the woodpeckers use as food. 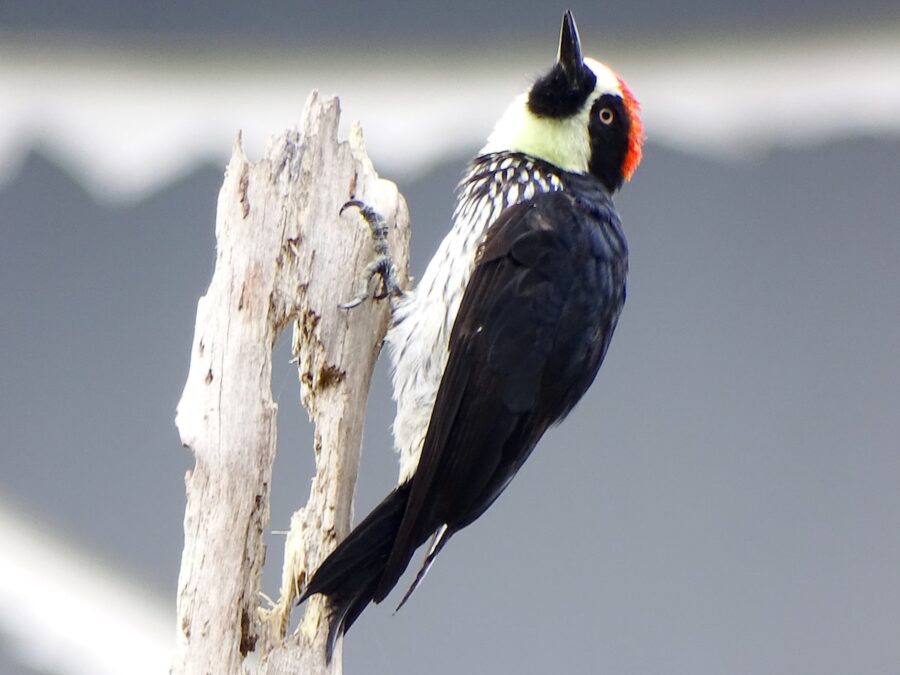 These woodpeckers get their name from the fact that they love to stockpile acorns in the small holes that they peck in tree trunks. They are located along the west coast of the US and can move inwards towards central America, or downwards towards Mexico if they wish.

These quirky and fun birds are quite social and will travel in colonies of 3-10 birds. This spirit of cooperation extends to nesting, where all members of the group will take turns incubating eggs and feeding the young. Scientists have found “granary trees” with up to 50,000 acorns!

Most woodpeckers have four toes, which makes this particular breed of woodpecker instantly recognisable to those that are really paying attention. This woodpecker species often nests in conifer trees like pine and spruce, feeding primarily on spruce bark beetles.