A praying mantis might not win a beauty contest. But these insects are incredible hunters. Their choice of prey is what makes them so useful for organic gardening and properties besieged by bugs. Are you curious about what makes the mantis so special in both cases? Great! Let’s find out how the praying mantis can lend a claw to your efforts to rid your garden of certain pests.

What is a Praying Mantis?

There are literally hundreds of different mantis species. But the type that most people are familiar with have green bodies and they are about the size of a pen cap. Mantises can be found all over the world – so if you fear them, you really have nowhere to run!

These insects are known for their odd, triangular heads and large eyes. But their most defining feature is a pair of forearms that are not just strong and deadly but can strike with lightning speed. The praying mantis is also exclusively carnivorous and it is this feature that makes them beneficial garden insects.

There exists some confusion about what’s on the mantis menu. Do they only eat bugs that destroy human crops or do they also eat the beneficial ones? Are they really capable of catching hummingbirds or is that just an urban legend? Let’s find out!

Most insects that find themselves in the crosshairs of a mantis coincide with what farmers and gardeners deem as pests. These tasty morsels include flies, moths, aphids, cockroaches, spiders, wasps, crickets, mosquitoes, and grasshoppers. A bold mantis can also devour small frogs and lizards.

While the praying mantis is valued as a form of organic pest control, it will catch beneficial critters if the opportunity presents itself. The mantis has no concept of “pests” and “good insects,” just food.

Related:  How Much Is A Cord Of Firewood?

These regretful casualties include butterflies, bees and other praying mantises. Indeed, the female mantis is famous for sometimes killing and devouring her own mate.

About that hummingbird story. Most praying mantis species that are native to North America are too small to catch these birds. But a few centuries ago, the Chinese mantis was imported as a form of pest control. While their intentions were good, nobody foresaw that the large insects – which can grow up to 4 inches (10 cm) long – were capable of snacking on small birds. While such killings are exceptionally rare, the Chinese mantis can hunt hummingbirds.

There is some good news. If your garden is a hummingbird haven, you can avoid a tragedy by moving all the bird feeders out into the open and away from any foliage. A mantis can fall prey to larger birds, so they prefer to hide in bushes and on branches. If you happen to spot a monster mantis on your bird feeder, gently coax it onto a stick and relocate it to another part of the garden – preferably your veggie patch!

How do I Attract Praying Mantises? 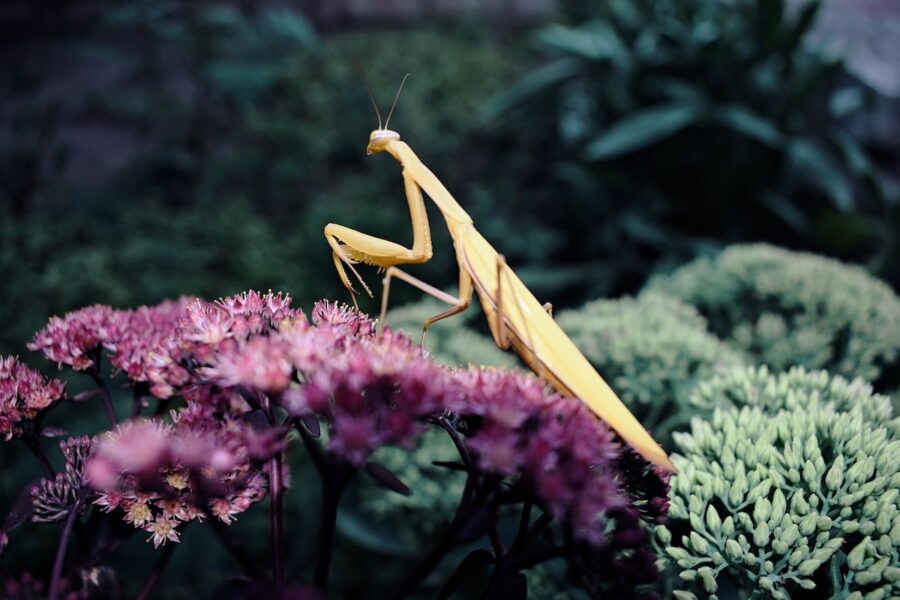 A lot of gardeners buy their mantises online or from breeders and then release them into the garden. But whether you go that route or prefer to attract them naturally, a mantis will only hang around if the conditions are right.

A mantis is a ferocious predator. But it also needs to hide from its own kind and insect-eating birds. A garden full of hiding places will not only give a mantis a sense of safety but will also provide the insect with plenty of opportunities to hunt between the branches of bushes and vegetable plants.

2. Offer Them a Drink

If you live in a rainy region, then this is not necessary. The mantis will quench its thirst on raindrops sitting on leaves and even blades of grass. But when the weather or season is hot and a good shower is not on the cards, your mantis crowd will appreciate a water source.

The key is to provide a safe way to drink. Take a very shallow dish, the lid of a jar or the plastic cap of a coffee tin – anything that isn’t too deep. Otherwise, the mantis might drown. Add an extra layer of security by placing flat pebbles in the water. The pebbles allow the insect to travel around the dish with ease and offer a foothold to grab onto when it falls into the water.

3. Use a Safe Insecticide

If your garden has a severe infestation of bad bugs, an insecticide might be necessary to bring the problem back under control. However, most insecticides kill indiscriminately and this will lead to the destruction of your mantis population.

The good news is that certain products are designed not to harm beneficial insects. Check the label very carefully before you purchase. Does it protect ladybugs, bees and praying mantises? If so, then you have found a winner!

Certain flowers attract praying mantises. Not only will they add shelter for these insects but the plants can add more beauty and variety to your garden. Some examples of mantis magnets include dill, raspberry canes, marigold, yarrow, fennel, angelica, lavender, rose and cosmos flowers.

5. Learn to Recognize a Mantis Nest

If you have never seen a mantis egg case, one might be forgiven for mistaking it for a wasp or spider nest. In the fall, a female mantis will produce a foamy nest which hardens into a case that is long, rectangular and has rounded edges. The color can vary from beige to brown. Most cases also have a rippled surface.

When you find these nests in your garden, then well done! You have a breeding population of mantises that are happy with the environment that you have provided for them. The eggs will hatch in spring and seed your garden with plenty of hungry baby mantises, ready to gobble up all those pesky aphids! 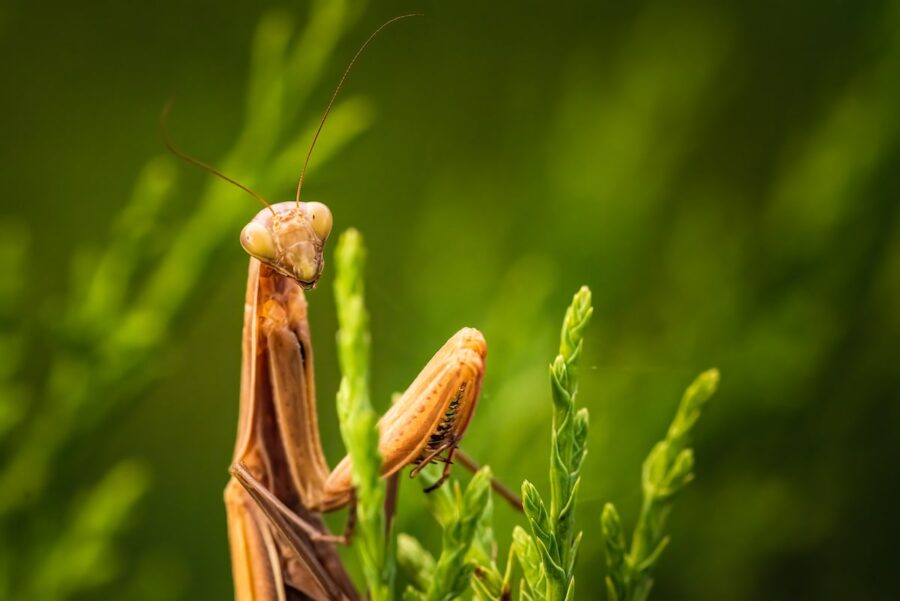 How many species of praying mantis are there?

The mantis family is very successful. Over 2,000 species exist today. In North America, you can find about 18 mantis species. Two of them, the Chinese mantis and the European mantis, can also be found in the US but they are not native to the region.

Related:  4 Reasons Why You Should Opt For Landscape Fabric
What is the lifespan of a praying mantis?

This depends on the species. Some of the smaller mantises only live a few months while others can live up to 6 months. The larger species can also live between 1 and 2 years.

I found a mantis egg case. Can I hatch it myself?

Yes, there is no reason why you cannot hatch it yourself. Some gardeners buy egg cases online and place them in a terrarium. You do not have to do anything special. The eggs will develop by themselves and eventually the babies will hatch. Raising the young mantises, however, can be very difficult. For this reason, some prefer to buy the cases or move the one they found to a safe spot in the garden and just let nature take its course.

Is it legal to catch adult mantises and take them to my garden?

There is no law against removing mantises from “the wild.” But do not trespass on someone else’s property in order to do so. While a mantis is relatively easy to catch, also ensure that the animal is not harmed during capture and that you transport it safely in a container with breathing holes.

How do praying mantises find food?

A praying mantis is a master at camouflage. They use their looks (greenish and stick-like appearance) to blend into the environment. A mantis will also sit absolutely still, making it even harder for prey and predators alike to spot it. Once another insect lands nearby, the mantis will strike with lightning speed and use its barbed forelimbs to catch and hold onto its meal.

How many praying mantises do I need to keep my garden pest-free?

Under optimal conditions, you only need a few praying mantises. The fact that they have superb vision (they technically have 5 eyes and a head that can move a full 360 degrees) – and faster reflexes than a housefly mean that a single praying mantis can hunt ravenously and successfully throughout a large swath of the garden.