Flies are common pests in various homes around the world. They’re considered the most abundant and widespread insects worldwide. In fact, nearly all homeowners have had to deal with fly problem at some point.

There are several fly species. However, the two most common ones you’re likely to encounter in your home are the housefly and the fruit fly.

As their name suggests, houseflies are generally attracted to the house. They feed on all manner of foodstuff but prefer animal products like meat, seafood, and milk. Houseflies can also feed on human fecal matter. Fruit flies, on the other hand, are mostly drawn to ripe fruits. They can also feed on leaves, vegetables, and plant secretions.

While all fly species can be a menace, the housefly holds the title for being the peskiest. If allowed to breed freely in your home, these insects can trigger a major public health crisis.

Some homeowners might console themselves that houseflies don’t live so long. While that may be true, these insects are highly prolific. A single female can lay hundreds of eggs during her lifetime. So, either way, houseflies are a menace that shouldn’t be tolerated.

In this post, we look at the average life cycle of a fly, with a special focus on the housefly.

How Long Do Flies Live? 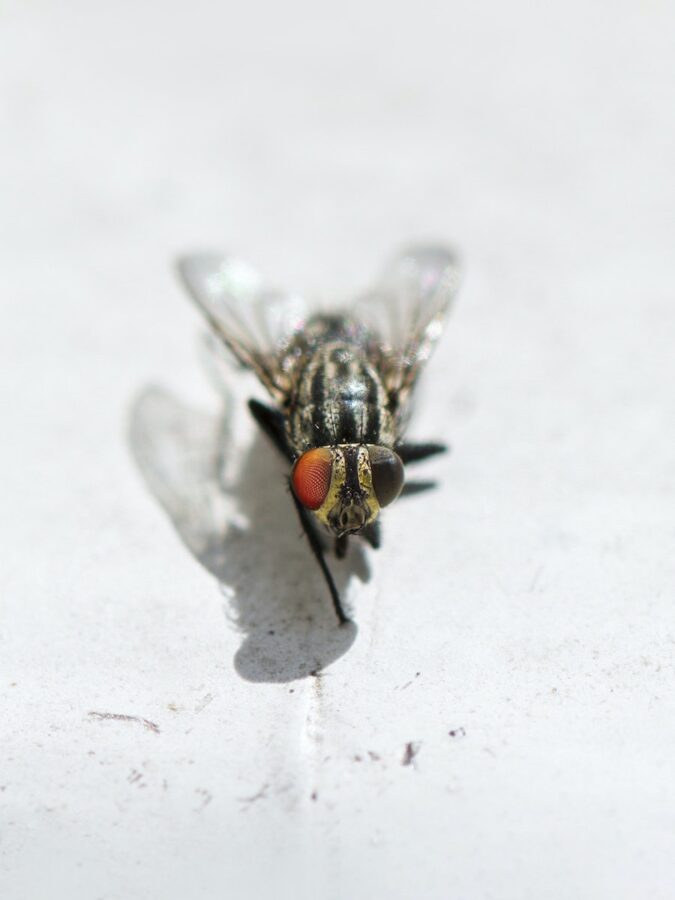 Most homeowners believe that flies live for about 24 hours. This is a common misconception that has been passed down for years. However, it’s not exactly true.

Most fly species (including houseflies) can live much longer than that. In fact, some fly species have been known to infest homes for months.

The only fly species with a 24-hour lifespan are the mayflies. A housefly’s average lifespan is between 15 and 30 days.

Of course, certain factors could make a housefly live longer or shorter than its 15 – 30-day average lifespan. For instance, houseflies will generally live longer where there’s an unlimited food supply and fewer predators. Favorable weather conditions, such as warmer weather, may also increase the lifespan of a housefly.

Another thing worth noting is that, like most insects, flies don’t grow into adulthood overnight. Instead, they take about two weeks to transition from the egg to the adult stage. Perhaps it’s this fact that informs the common misconception about houseflies living for a period of one day.

Related:  How To Deal With A House Worm Infestation (A Definitive Guide)

By the time these insects attain full maturity, they usually have a relatively short duration left to live. But as you’ll find out later on, flies can breed in their hundreds within that short time span.

It’s also important to note that flies have a different perception of time compared to humans. Have you ever noticed how hard it is to swat a fly? Well, that’s because these insects can see objects nearly four times faster than humans. To them, a newspaper swat happens in slow motion.

So, if you consider the fact that flies view our world in slow motion, then it means they probably live much longer than we think they do. At least from their own perspective.

The Life Cycle of a Fly 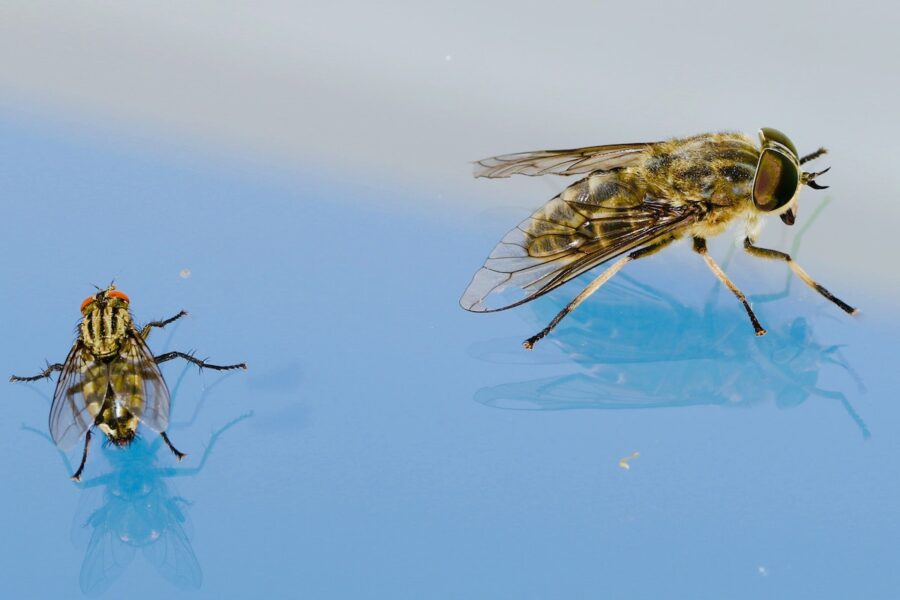 Like many other insects, flies develop into full maturity via a process known as complete metamorphosis. The process encompasses four growth stages, namely Egg, Larva, Pupa, and Adult.

The life cycle of a fly begins when the female fly finds a favorable spot to lay her eggs. Usually, this is a place where the larvae can feed for a time before transitioning into the pupal stage. Common areas include on rotting wood, decomposing corpses of animals or other insects, and on food (be it fresh or rotten).

An average female fly is capable of laying upwards of 150 eggs in a single batch. Sounds scary, right?

Well, that’s not scary enough if you also consider that a single female fly can lay up to six batches of eggs during her lifetime.

Even worse is the fact that the vast majority of fly eggs will transition to the larva through the adult stages, given favorable conditions. Which explains why fly infestation can happen so fast.

How do you recognize fly eggs?

However, the eggs can expand in size so fast. Within a few hours, a housefly egg can grow up to ten times its original size.

Related:  5 Easy And Cheap Ways To Get Rid Of A Maggot Infestation

After getting laid, fly eggs take between 8 and 20 hours to hatch. And after hatching, the eggs emerge as white worm-like creatures which resemble translucent caterpillars, known as maggots. This marks the onset of the larva stage.

Just like the eggs, maggots can increase in size so fast. That’s especially if they find ready food and a favorable environment.

The maggots will remain in the larval stage from a few hours to a couple of days before transitioning into the pupal stage.

Besides their creepy appearance, maggots are probably not as dangerous as adult flies. That’s because they’re limbless and cannot already fly. They’ll feed on local food sources, without which they’ll die.

Maggots are also a favorite delicacy for predatory insects and birds. Plus, their high sensitivity to intense light and extreme temperature conditions makes them highly vulnerable, hence more harmless than adult flies.

As maggots enter the pupal stage, their characteristic white, limbless appearance begins to change shape. They may look like the dissected beetle abdomen or a cockroach egg sac.

The pupae are also considerably larger than the larvae. They spot a range of colors, from yellow, red, black, and brown.

Fly pupae prefer cool, dark, and quiet spots where they undergo full growth and development. Some of the changes that take place during this stage include the development of legs and wings. These changes typically happen within one week, after which adult flies emerge.

This is the final stage in a fly’s life cycle. The stage is marked by heightened activity, including mating and breeding.

Having developed fully functional wings, adult flies can either choose to infest your home or fly off to places with better feeding and breeding conditions.

Related:  Carpenter Ants vs Black Ants: How Do They Differ? 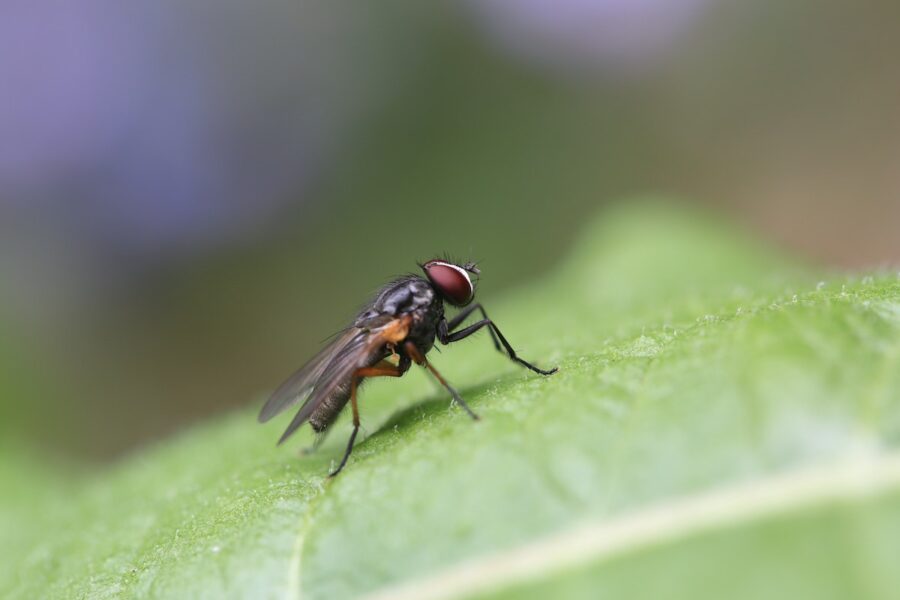 Flies may only live for between 15 and 30 days. But they can raise hell in your home during their lifespan. That’s especially considering that one female fly can lay up to 150 eggs in a single batch, and that she can breed as much as six times during her lifespan.

If allowed to breed freely, flies can contaminate food and food preparation surfaces, opening you up to a host of gastrointestinal complications. Therefore, your best bet is to adopt preventive measures and avoid a possible fly infestation. The best way to go about that is by conducting scheduled inspections around your property.

If it happens that the flies have already infested your home, you can deal with the problem by hiring a professional pest control company. These technicians will help you understand the specific flies you’re dealing with, as well as locate their breeding sites.

As we already mentioned, there are several fly species. Common ones include houseflies, fruit flies, gnats, and blowflies (also known as bluebottle flies). Each species has its distinctive appearance and natural expiration date.

After locating the fly breeding spots, professional pest control technicians will recommend the safest way to get rid of these pesky insects. This usually includes applying pet-safe, biodegradable pesticides on the common surfaces the flies are likely to come into contact with.

Flies may have a relatively shorter lifespan compared to most insects. However, these pesky insects can pose grave health risks around your home during their lifetime.

The fact that flies are prolific breeders makes them difficult to control once they’ve infested your home.

Therefore, it’s recommended to conduct regular inspections to arrest the problem before it develops into a full-blown disaster.