The common carpenter ant is one of the numerous ant species that you’re likely to encounter in your home. Like its cousins, the carpenter ant has certain phenotypic and behavioral characteristics that distinguish it from other common ant varieties.

As a concerned homeowner, you’d want to uncover everything there is to know about these ants, including how likely they are to invade your house and bite you. Learning more about carpenter ants is particularly necessary if you’re keen on getting rid of these creatures from your home.

Fortunately for you, we’ve prepared a definitive guide into carpenter ants, with a special focus on whether these creatures bite or not, and the specific circumstances that could cause them to bite humans.

What Are Carpenter Ants? 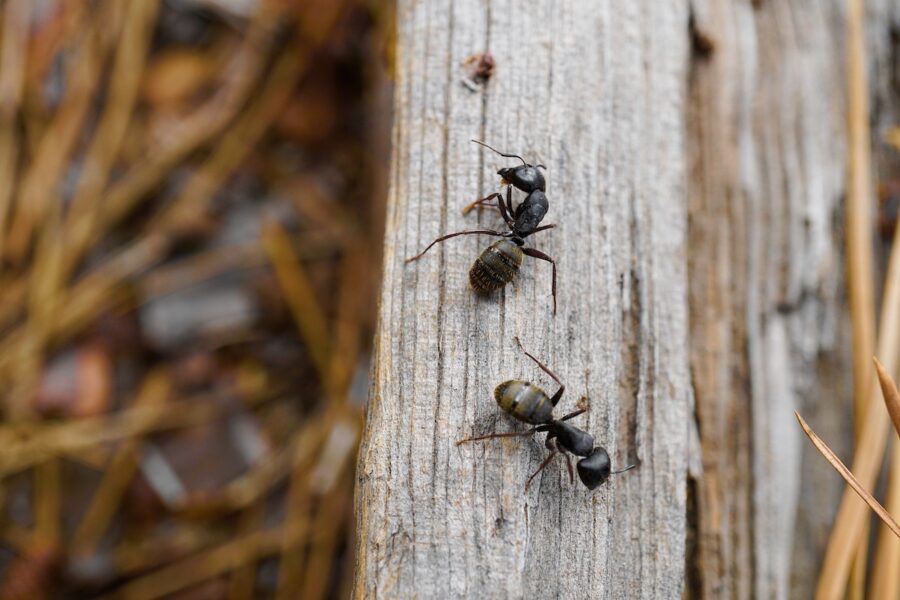 Carpenter ants are black, brown, or red ants that typically build their nests by tunneling through moisture-damaged wood. The ants mainly feed on plants growing adjacent to their nesting areas.

But like most ant species, carpenter ants are omnivorous. Their other diets consist of insects and household sugary foods.

Carpenter ants are common in homes across the United States, particularly in the New England region. So far, researchers have been able to identify over 1,000 distinct carpenter ant species.

Carpenter ants rarely bite humans. And even they do, their bites are relatively less vicious compared to that of other insects.

In most cases, victims may feel a burning sensation. But the feeling is usually mild and short-lasting.

Another thing worth noting is that carpenter ant bites are less dangerous to your health than the bites of common insect pests. For instance, the likelihood of a carpenter ant transmitting disease is considerably lower than other insects like mosquitoes.

However, it’s still important to treat carpenter ant bites with a degree of seriousness. Note that there may still be some risks of transmitting bacterial and fungal infections. That’s especially if bitten by an ant that has been foraging through dirty trash cans.

Related:  What To Do If You Find Rat Poo In Or Near Your Home (Quick Guide)

Under what circumstances do carpenter ants bite?

Although human encounters with carpenter ants are unlikely to turn chaotic, these ants can still bite in self-defense when injured or handled.

When they feel threatened, carpenter ants can go on the offensive, biting every creature they encounter. That includes humans, pets, poultry, and even cattle.

Carpenter ants may also bite if they feel their nest is in danger.

Like most ants, carpenter ants are known to fight viciously to fend off potential intruders. So, when they feel their nest is threatened, multiple carpenter ants may come out and attack the trespasser. This underscores the importance of treading with caution while trying to remove carpenter ant nests from your home.

As we already indicated, a carpenter ant’s diet comprises plants, other insects, and sugary foods. Unlike ticks and bedbugs that bite humans specifically to take blood meals, carpenter ants will only bite if they feel threatened.

This explains why carpenter ants are unlikely to encroach into human space. They may have built a nest in your compound, alright. But carpenter ants won’t venture closer to your house unless when hunting or scavenging for food. And even when they come within close quarters, they’ll try to avoid encounters with you.

What Are The Risks Of Carpenter Ant Bites?

The reason carpenter ant bites tend to be painful is that these ants release formic acid when they bite. Formic acid produces a burning sensation similar to that of a sting bee.

All the same, the chemical may trigger an allergic reaction.

Common symptoms of allergy include:

Related:  A Brief Guide To Termites And Their Potential To Bite Humans

Carpenter ants have fairly strong mandibles and a normal bite can easily break the skin. You might even see a small amount of blood oozing from the bite site. And that’s when you could be at risk of bacterial or fungal infections.

If the carpenter ants happen to have been foraging in dirty places, their bodies may be covered in disease-causing bacteria or fungi. These pathogens could easily enter your bloodstream through the bite marks.

You can prevent infection by avoiding scratching the bite marks.

Should I seek medical treatment for carpenter ant bites?

Again, you won’t need medical attention in most cases of carpenter ant bites. The pain and swelling should go away in a day or two.

But if the symptoms persist or if you develop a clear allergic reaction, seek medical treatment immediately.

It’s also recommended to seek medical attention if you happen to have received multiple bites. 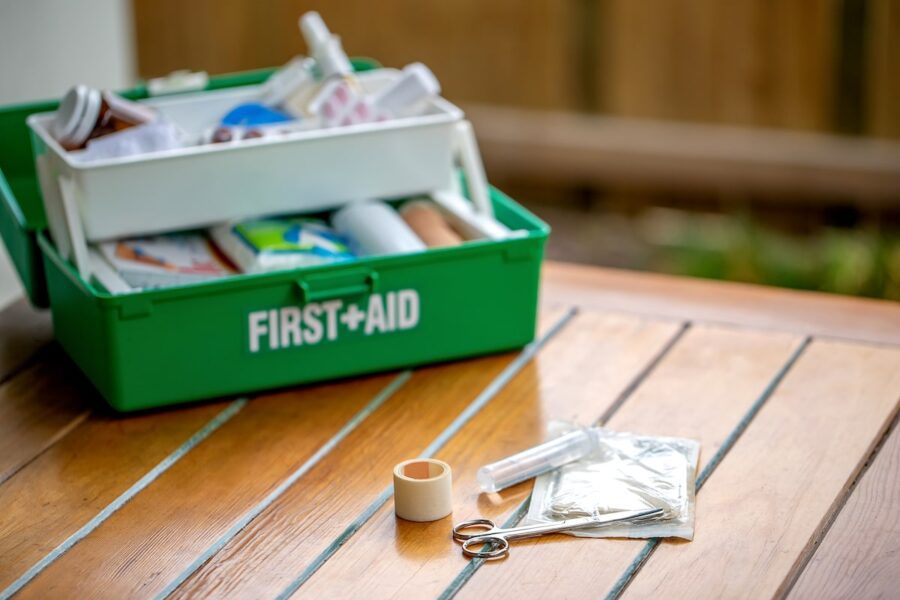 Despite the fact that carpenter ants are non-venomous and their bites are considerably less painful, it’s still important to take remedial measures to alleviate the pain and inflammation caused by carpenter ant bites.

Here’s a procedure on how to go about that:

i. Clean the bite marks using antibiotic soap and warm water immediately after getting bitten.

This will help to rinse away the formic acid, thereby reducing the pain and inflammation associated with the chemical.

You may also ease the pain by applying ice directly to the bite marks for about ten minutes, or making a cold compress.

ii. After cleaning the bite marks, examine your skin to determine the depth of the injury.

If the bites broke your skin, apply an antiseptic cream directly to the bite marks.

iii. Bandage the wound if necessary.

If you don’t have a first-aid kit at the ready, there are several other household items you can use to treat carpenter ant bites.

Related:  10 Ways To Banish Crows From Your Garden

iv. Wait for a day or two for the symptoms to go away. 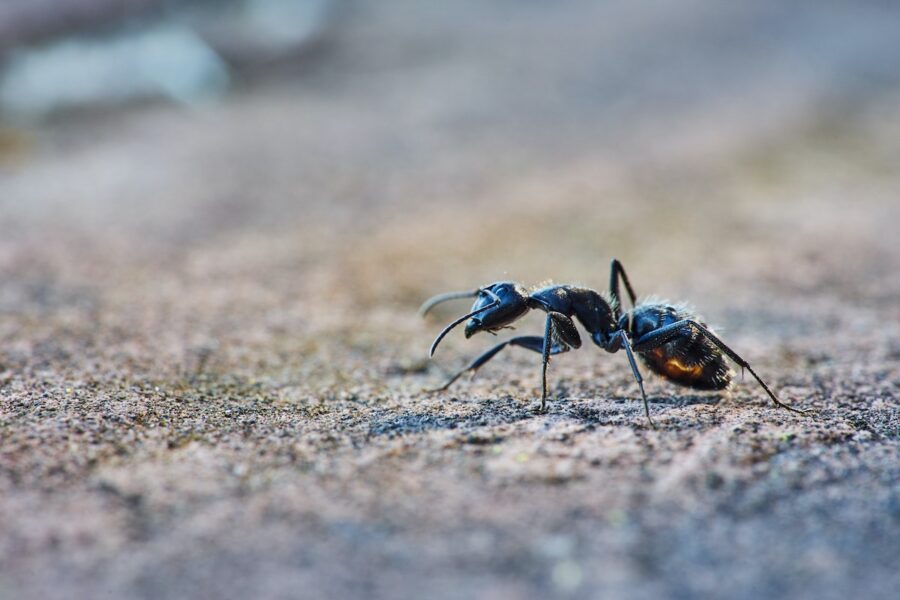 Carpenter ants rarely bite humans. Their bites are also non-venomous, less painful, and less likely to develop into a medical emergency. However, it’ still important to avoid getting bitten by these insects.

One way to do that is by avoiding carpenter ant nests. That’s especially if the ants have already set up colonies in your home.

Another control measure is by removing food and water sources, as well as wood piles near their colonies.

You might also consider getting rid of carpenter ant nests from your home. But as these insects are known to defend their nests viciously, it’s not recommended to remove the nests by yourself. Your best bet would be to hire a professional pest control company. Insist on a pest remover with prior experience handling carpenter ants. It’s also important to inquire about the safety of their pest removal methods.

Last but not least, try to conduct routine inspections on your property. This will go a long way in preventing the insects from forming colonies in your home in the first place.