China is a multicultural utopia, a nation that offers peaceful coexistence for people from different walks of life. The country also teems with some of the world’s most breathtaking landscapes, including ancient temples and the iconic Great Wall.

China is also home to thousands of animal and plant species, including flower varieties that are only endemic to the country. In this post, we look at 25 traditional Chinese flowers and their symbolism in Chinese traditions. 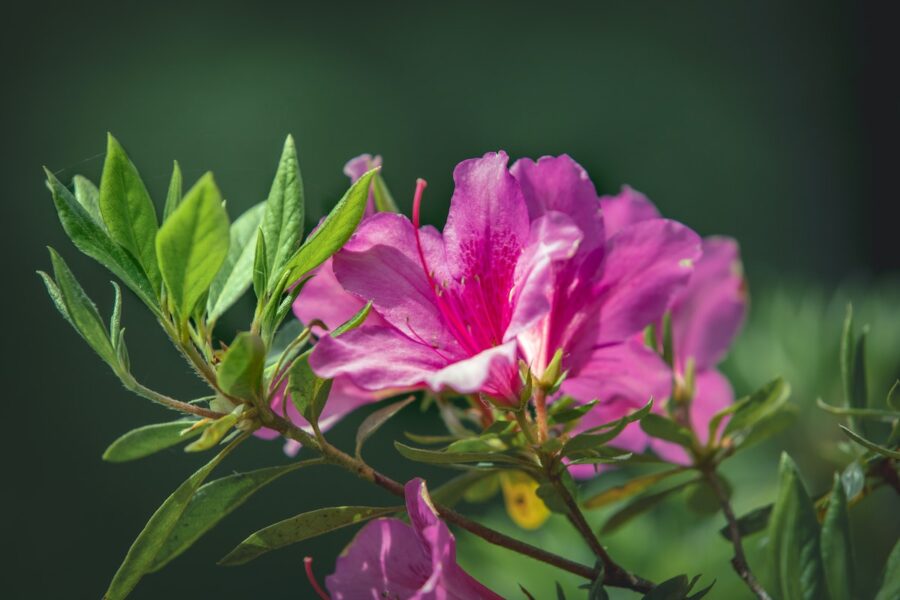 Azalea is a genus of flowering shrubs that produces 1,024 species. Plants in this genus are classified as either evergreen or deciduous.

Azalea shrubs are widespread in China and throughout Asia. And while they’re poisonous, the Chinese people believe that Azalea plants represent happiness and prosperity.

The plant is so symbolic that its flowers are used as the official flowers in several provinces in China.

The Rhododendron is similar to Azalea in numerous ways. The two plants even share the same genus.

Perhaps the one notable difference between Azalea and Rhododendron is their symbolism in Chinese culture. While Azalea stands for happiness and prosperity, Rhododendron symbolizes purity, beauty, and devotion.

The sunflower is popular worldwide for its nutritious oil. The plant also produces beautiful flower blossoms that can transform any landscape into a magical spectacle.

In Chinese culture, the sunflower also represents fortune and longevity. Past Chinese aristocrats consumed sunflower seeds as a snack, believing that the plant could help them attain immortality. 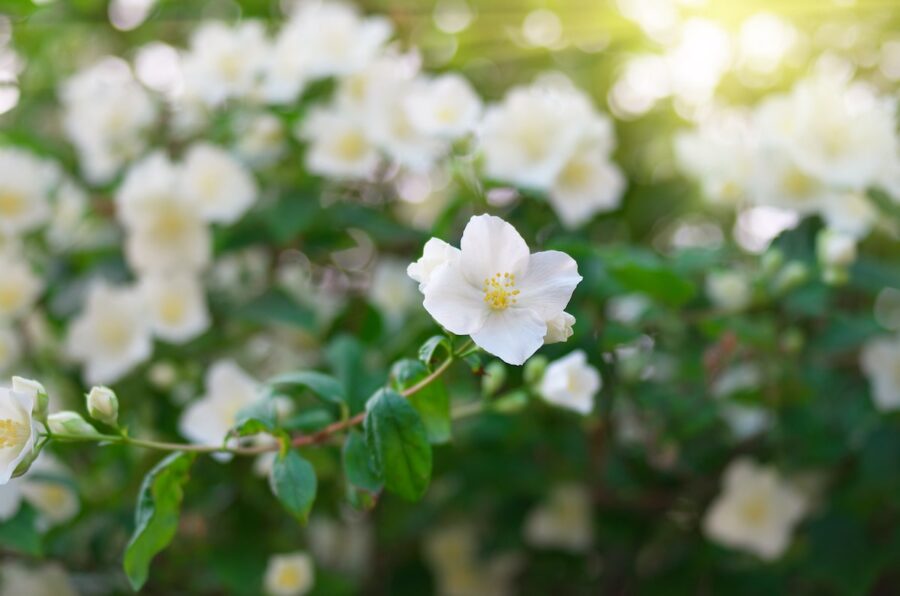 Jasmine is a genus of shrubs and vines that belong in the Oleaceae family, the same family that produces olives. It’s one of the most iconic plants, which explains why the name ‘Jasmine’ is a popular girl name in many cultures worldwide.

It appears that the Chinese hold the jasmine plant in even higher regard. According to Chinese traditions, jasmine flowers represent eternal love.

Jasmine is one of the holy flowers in Buddhism. Commonly referenced using edifying terms like “Queen of the Night,” Chinese people believe that the fragrance exuded by jasmine flowers comes straight out of heaven.

Related:  How To Use Coconut Coir In Gardening

The orchid has long been associated with celebrated ancient Chinese philosopher, Confucius. Just like Confucius, this flower represents the qualities of being a gentleman or good-cultured.

Tulips were originally endemic to the Tian Shan Mountains. But when the plant’s popularity erupted in the 17th century, tulip flowers became a favorite item for collectors around the world.

Today, you can find tulips in virtually every country. The flower is considered a symbol of love and new beginnings in China.

Annual aster goes by various other names, including aster peony and China aster. As the name suggests, this flower blooms annually (typically from early summer to fall).

Like other perennial asters, China asters are incredibly easy to grow. The plants require minimal care and maintenance.

In China, the aster peony symbolizes love, faith, and wisdom. 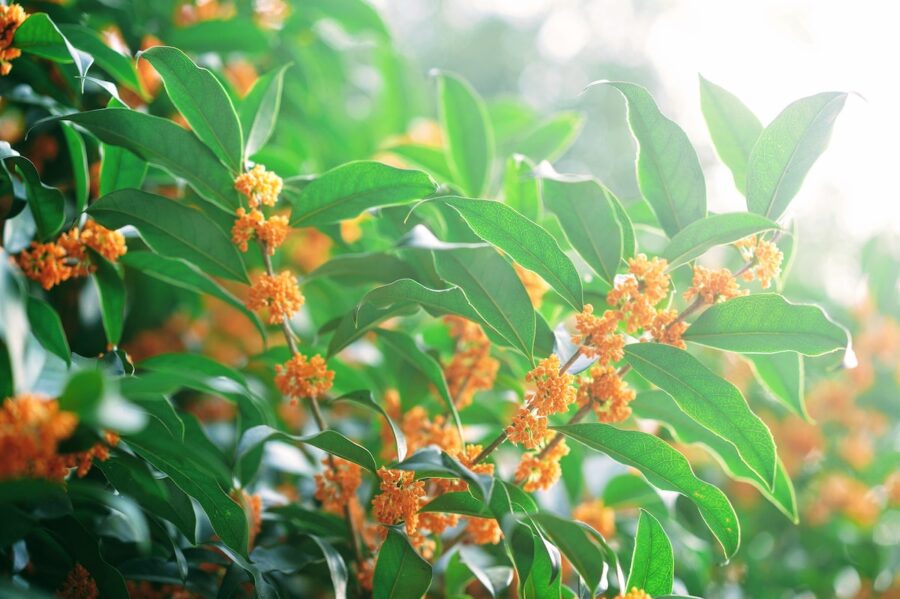 The Osmanthus is one of the oldest Chinese flowers, with numerous appearances in ancient Chinese poetry books. The plant stands out for its spellbinding fragrance. Its flowers are commonly used as a spice in local Chinese food, as well as in brewing tea.

But while the Osmanthus has thrived in China for thousands of years, only the affluent could plant this flower in ancient China. The flower has been used for years as a representation of love and romance.

Authors and thespians alike continually use the lotus as a classic example of overcoming adversity, considering the many obstacles the plant surmounts before it can bloom.

Lotus also has strong links to Buddhism, where it represents wisdom, peace, purity, and perfection. The flower is also a mark of honor and humility.

Lilies are famous for their mysterious growth cycle, which includes dying, re-flowering, and dying again. That explains the flower’s significance, particularly in Chinese traditions.

According to Chinese people, lilies symbolize fortune, happiness, and the endless cycle of life. 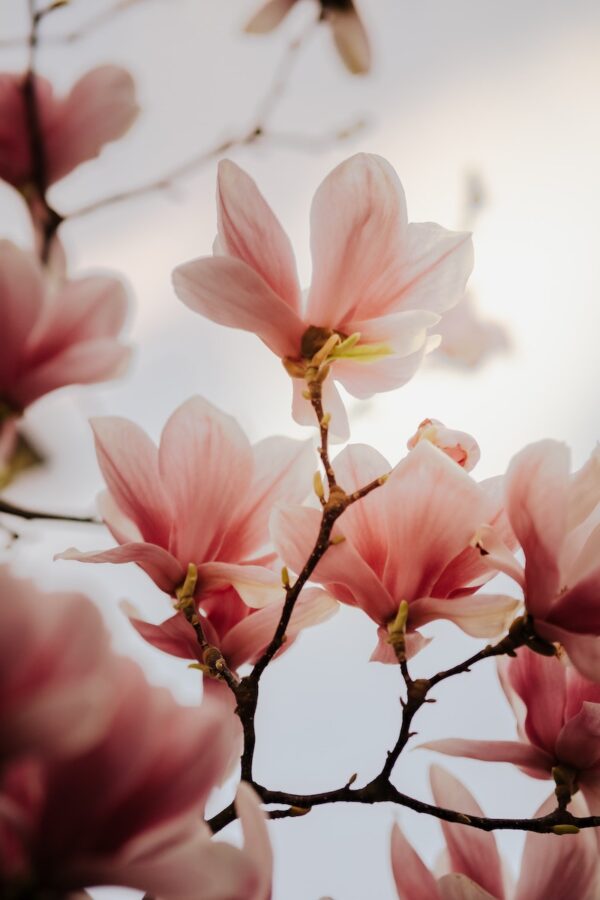 Magnolias are known for many things, including their interesting history, medicinal properties, and high resilience compared to other common flower species.

In China, the magnolia is also a symbol of honor, purity, wealth, beauty, and femininity.

Christened ‘the flower of July’ in China, balsamine is another flower with deep symbolism in Chinese culture.

The plant produces several cultivars, including garden balsam, rose balsam, and spotted snapweed. All these varieties are associated with beauty, energy, and eternity.

Related:  How To Keep Squirrels Out of Potted Plants

Also known as China pink, Chinese carnation is a flowering plant that produces stunning blossoms which feature a solid white color or an assortment of colors, usually with hues of purple or pink.

The plant is associated with love, gratitude, and magic in Chinese culture.

Chinese plum blossom is one of the hardiest flower species in the world. The plant is known to blossom even during winter, defying all the vagaries of winter weather.

No wonder the Chinese people associate this flower with hope, vitality, endurance, and inner strength. 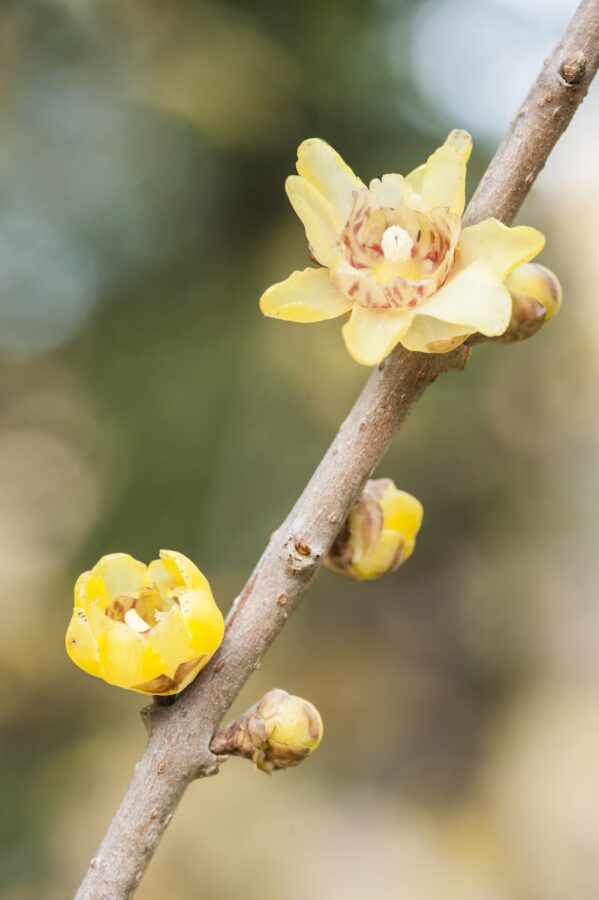 While the Chinese plum blossom can bloom even in the dead of winter, wintersweet only blossoms in winter. That makes it the hardier of the two plants.

Wintersweet produces bowl-shaped flowers that exude a sweet fragrance, which explains its moniker. The flower resonates with qualities of strength, fearlessness, and willpower.

Hibiscus is a medicinal plant that needs no introduction. The plant is commonly used to stimulate appetite, promote diuresis, relieve respiratory congestion, and clear summer heat.

Hibiscus is also famous for its enchanting blossoms, which can range in color from red and orange to yellow, pink, etc. In China, the hibiscus flower represents affluence, fame, splendor, and glory.

The literal translation of Narcissus is “water goddess.” And according to Chinese legend, this flower can expel evil spirits. 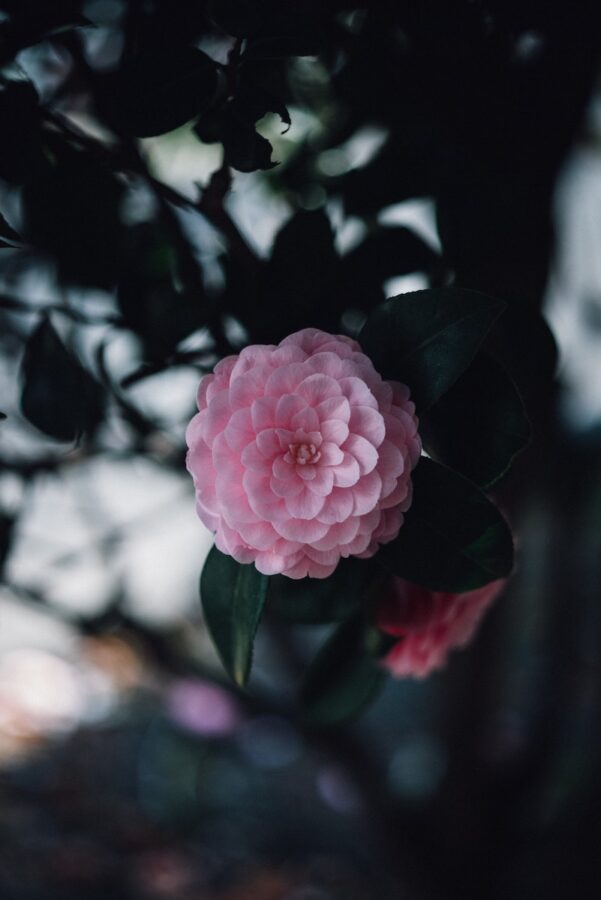 Did you know that the oil obtained from the camellia plant is traditionally used in sharpening knives and blades?

I can bet another fun fact you didn’t already know is that this plant is native to China, where it’s associated with young sons and daughters.

Gardenia is the official flower of November in Chinese tradition. The flower connotes feminine beauty and strength.

In the olden days, Chinese women adorned their hair with gardenia flowers to look more beautiful. The women also used the fragrance obtained from gardenia flowers as a key ingredient in making cosmetics and incense.

Don’t let the name fool you; this plant has little to do with the colored tissue at the center of the eye, which contains the pupil. Instead, the iris is a genus of 260 – 300 flowering plant species. The plant’s name translates to ‘rainbow’ in Greek, a name it aptly earned due to its showy flowers.

Related:  How To Care For And Grow Your Banana Leaf Plant With Ease

According to Chinese culture and legend, the iris acts as a medium between the physical and spiritual reals. The flower also represents wisdom, purity, faith, new beginnings, and the warmth of summer.

Most flowers choose when to bloom. But the Chinese rose flower blossoms all year round, which probably explains why the plant is christened the “Queen of Flowers.”

The Chinese rose flower is the plant to consider if looking for a flower that will breathe life into your home garden throughout the year. In China, this flower is believed to bring good luck.

Chrysanthemum has been used in folk medicine for thousands of years. The boiled roots of this flowering plant are believed to offer relief from headaches.

Chrysanthemum is also native to China, where it symbolizes the ninth lunar month and fall. The Chinese people associate the plant with duration, vitality, honor, and good luck. 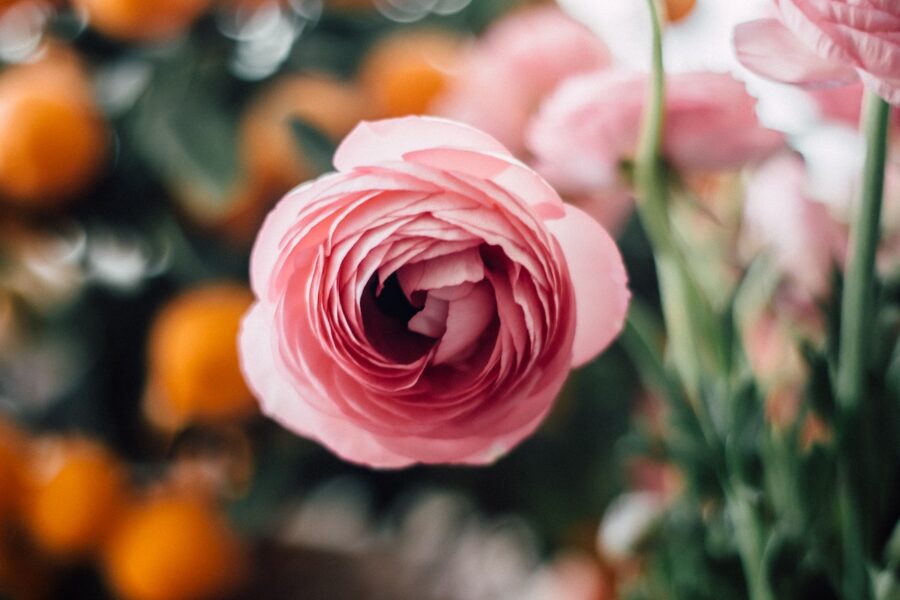 Ranunculus, also known as buttercup, is a genus of flowering plant that produces tons of species and varieties. There are up to 78 species and 9 cultivars of the buttercup native to China.

Ranunculus can convert any dull landscape into a beautiful spectacle when in bloom, thanks to its assortment of differently-colored petals. In Chinese culture, the plant stands for beauty, divinity, and forbearance.

Trichosanthes Kirilowi is widely distributed in the Shanxi, Henan, Hebei, and Shandong regions of China. Like most plants on this list, the herb provides immense healing properties, including the ability to expel body toxins.

In addition to its conventional therapeutic application, the Chinese people also believe that Trichosanthes Kirilowi may offer offer spiritual healing.

The last flower on our list is no less significant in Chinese traditions. In fact, the peony is so important in Chinese culture that most people in China consider it the unofficial national flower. There’s even an annual peony festival held in Luoyang region between April and May.

In terms of symbolism, the peony is associated with honor, riches, happiness, and prosperity.

There goes our definitive guide to the 25 most symbolic flowers according to Chinese culture and tradition.

We hope you can bookmark this article as a guide the next time you want to give your spouse or friend a befitting flower gift.