The Alocasia black velvet appears as exotic as it sounds. However, it is not black in color, as its name suggests. The name depicts the shadowy, velvet leaves of the Alocasia. If you want to add this plant to your collection, we’re here to guide you through the process.

Alocasia black velvet is also commonly known as Alocasia Reginula. It is precious in the field of horticulture and is therefore titled the Jewel Alocasia.

It differs from other leaves in terms of brightness and vibrancy. The leaves of the Alocasia black velvet are not dull but rather dim. This is explained by the ability of this plant to absorb all frequencies of light and not just the ones responsible for bright leaves. The leaves also have a timid silver hue, which further enhances the grace of this jewel of a plant!

The Alocasia black velvet was first discovered in 1860 on the tropical island of Borneo. Its tropical origin allows it to thrive under stringent heat conditions.

Let’s find out all there is to know about growing and caring for the Alocasia black velvet. 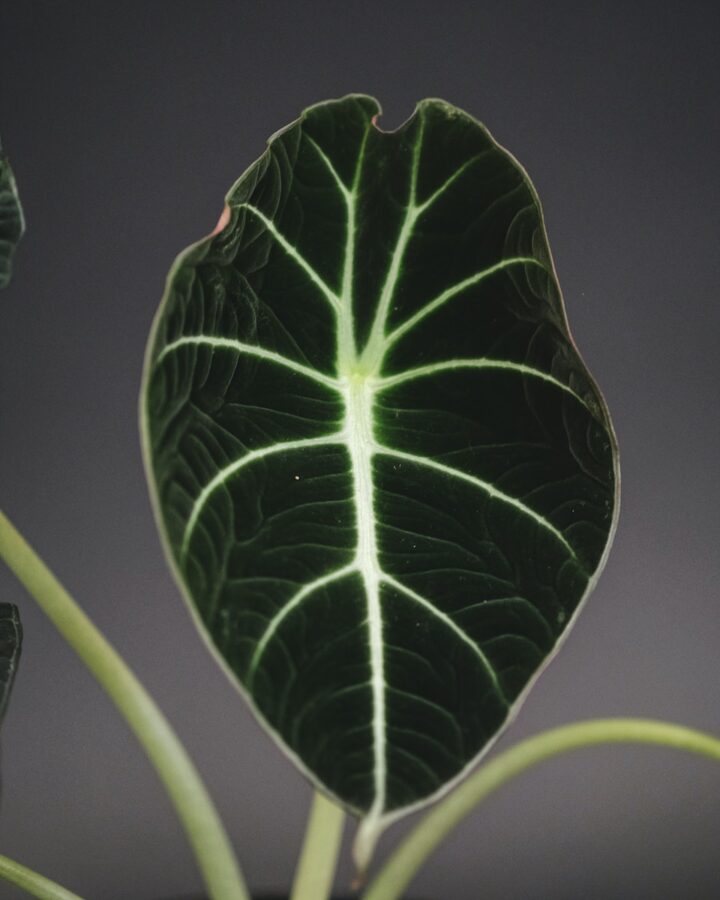 This exotic indoor aroid belongs to the Alocasia family, which houses over 75 species under its umbrella. They are flowering perennials with their rhizomes serving as roots.

The exciting part is that the elephant ears offer blooms! However, they are sterile and resemble the nature of anthurium’s flowers.

Related:  How to Grow and Take Care of an Almond Tree (Guide)

These are generally considered to be house plants, but they might need a little sunbathing during the summer months.

Alocasia velvet black hits peak growth during spring. It is considered to be one of the faster-growing Araceae.

Varieties of the Alocasia black velvet 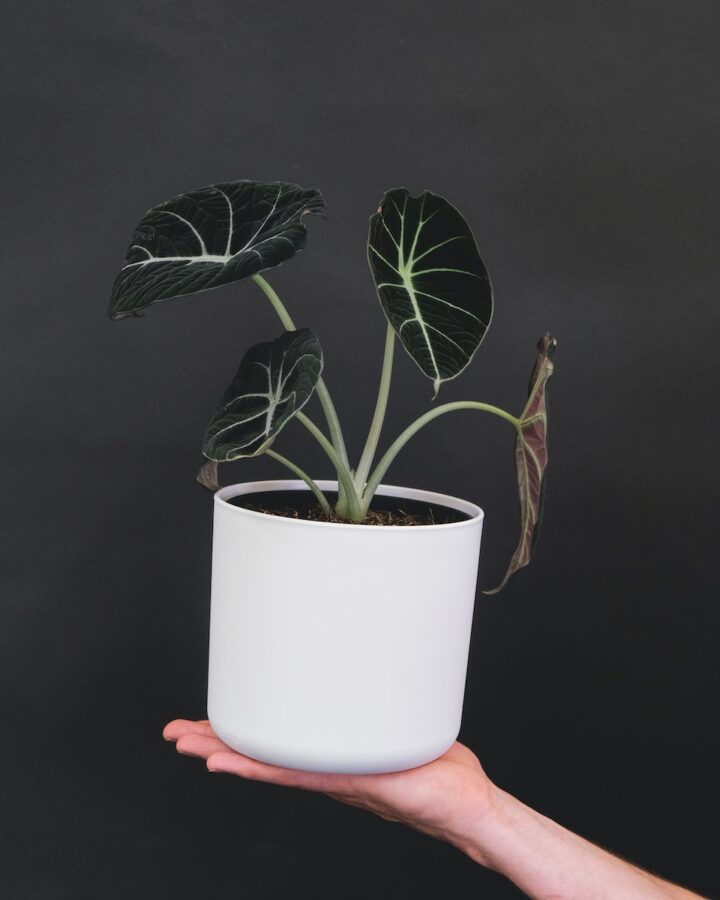 Not only is this variety rare, but it’s also drop-dead gorgeous! It is commonly known as the Red Mambo and has intensely deep purple leaves that appear black. The Red Mambo will uplift your theme like no other if you have a gothic or modern contemporary interior. However, Alocasia Azlani is not just rare; it’s downright expensive!

This specific Alocasia is just as cool as it sounds. Its leaves represent actual dragon scales, hence the name! The leaves have an exquisite silverish-green hue. The leaves are divided into sections by a deep, dark green color that appears black under certain lightings.

It is also known as the Kris plant or Sander’s alocasia. The kris plant has unique Y-shaped leaves with zig-zag edges. In my opinion, it indeed possesses one of the most diverse foliage. This species is found in the Philippines, particularly in Northern Mindanao.

This Alocasia is also known as the Giant Taro and grows up to 15 feet tall. Its leaves alone size up to 3-4 feet!

Individuals who have a solid inclination for bronzy, sultry reds will fall in love with the color scheme of Alocasia Cuprea. It expresses metallic red leaves with a glossy, bronze sheen.

The name depicts the similarity of this plant to Zebra stripes. This hybrid cultivar exhibits zebra-like stems and arrow-shaped leaves.

How to Care for the Alocasia black velvet 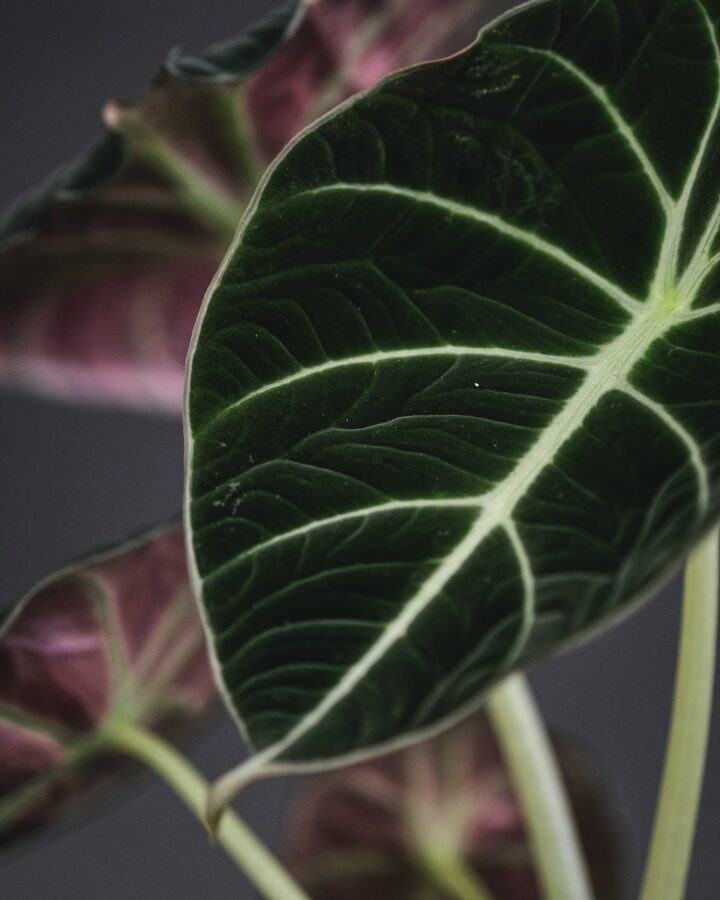 I wouldn’t consider it a high-maintenance plant, despite its diva-like appearance. Alocasia definitely has higher chances of thriving if taken care of properly.

You can easily grow this plant indoors, even if you’re a beginner.

Think about ways to mimic its native area: the Borneo island.

The Alocasia black velvet is used to thrive under large canopies in the tropics; it thus prefers shaded environments with tangible indirect sunlight.

Bright, indirect sunlight is the key requirement of alocasia black velvet. Keep it away from windows that would expose this plant to direct sunlight.

A well-aerated yet moisture-retentive soil serves the Alocasia black velvet well enough. We don’t want dense, compact soil that could result in waterlogging and root rot.

Use a standard potting mix and supplement it with some perlite or peat moss to encourage aeration.

You need to water your alocasia velvet black light to moderately but frequently.

Avoid over-watering or over-drying of the soil. Insert your finger 2 inches into the soil to test the dampness. If the top 2-3 cm of soil is dry, you need to give it a drink for it to gulp!

This is a tropical plant, so it’s obvious that your alocasia is fond of warmth. Try to maintain a temperature range between 21-25 degrees celsius.

A 10-degree temperature drop could prove to be fatal for the alocasia black velvet.

60-70%% humidity levels are preferable for this aroid.

Alocasias are heavy feeders. You must apply a bi-monthly liquid fertilizer to encourage healthy growth patterns for the black velvet.

Consider re-potting your Alocasia black velvet when its roots start popping out of the pot’s holes. The re-potting frequency is usually once a year.

Related:  How To Use Coconut Coir In Gardening

I always suggest using progressively larger pots or containers each time you re-pot a plant.

Due to its unique rhizome network, this exotic aroid can be propagated by rhizome splitting. You may also use seeds, but that will make the process lengthy and tedious.

Propagation should be carried out exclusively during spring. That’s when you’ll have maximum success rates for this process.

Propagation by rhizome splitting is demonstrated in this easy tutorial.

This situation has more to do with moisture levels. Inadequate watering or low humidity levels will rob your Alocasia’s leaves of their natural turgor pressure and plumpness.

Make sure to water your black velvet frequently.

Drooping stems suggest that your Alocasia is desperate for light and is changing its alignment in search of it – hence the posture change!

Place your plant in an area with abundant bright, indirect sunlight, and it’ll be good to go.

Wilting could indicate overwatering, which eventually leads to root rot. The clogged water bodies in the soil allow a fungal infection to brew up. 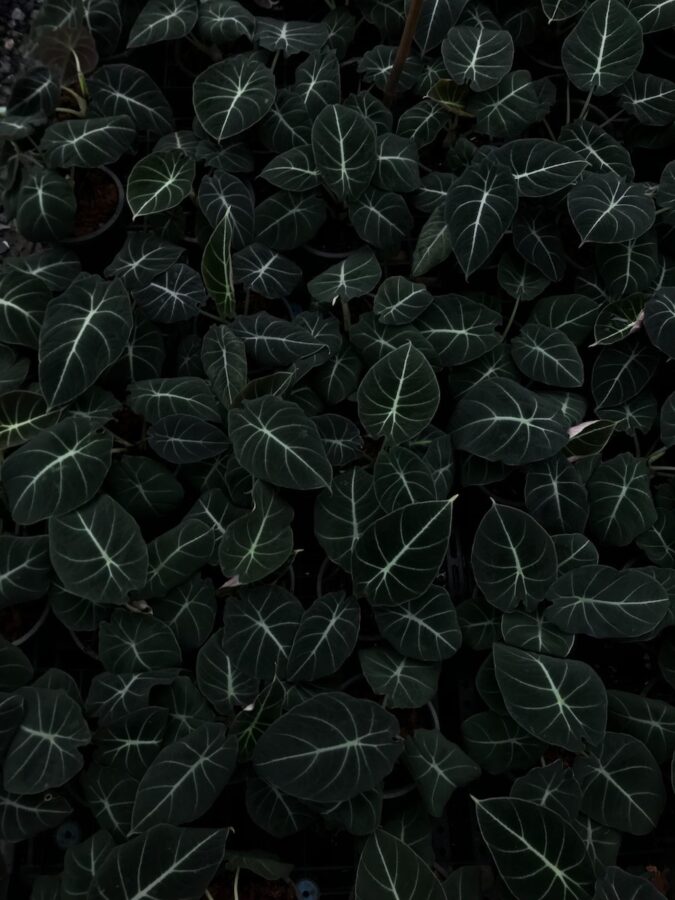 How big will my Alocasia black velvet grow?

An average Alocasia black velvet will not grow more than 40-50 cm. Indoors, it’ll stick to a size of no more than 30 cm (approximately). Its leaves extend up to 9-12 cm.

These are small dwarf plants, thus very easy to maintain.

Should I prune my Alocasia black velvet?

You may consider pruning the Alocasia black velvet to remove any discolored leaves and worn-out stems. This exotic aroid grows fast but does not reach enormous sizes, so pruning sessions won’t be required as frequently.